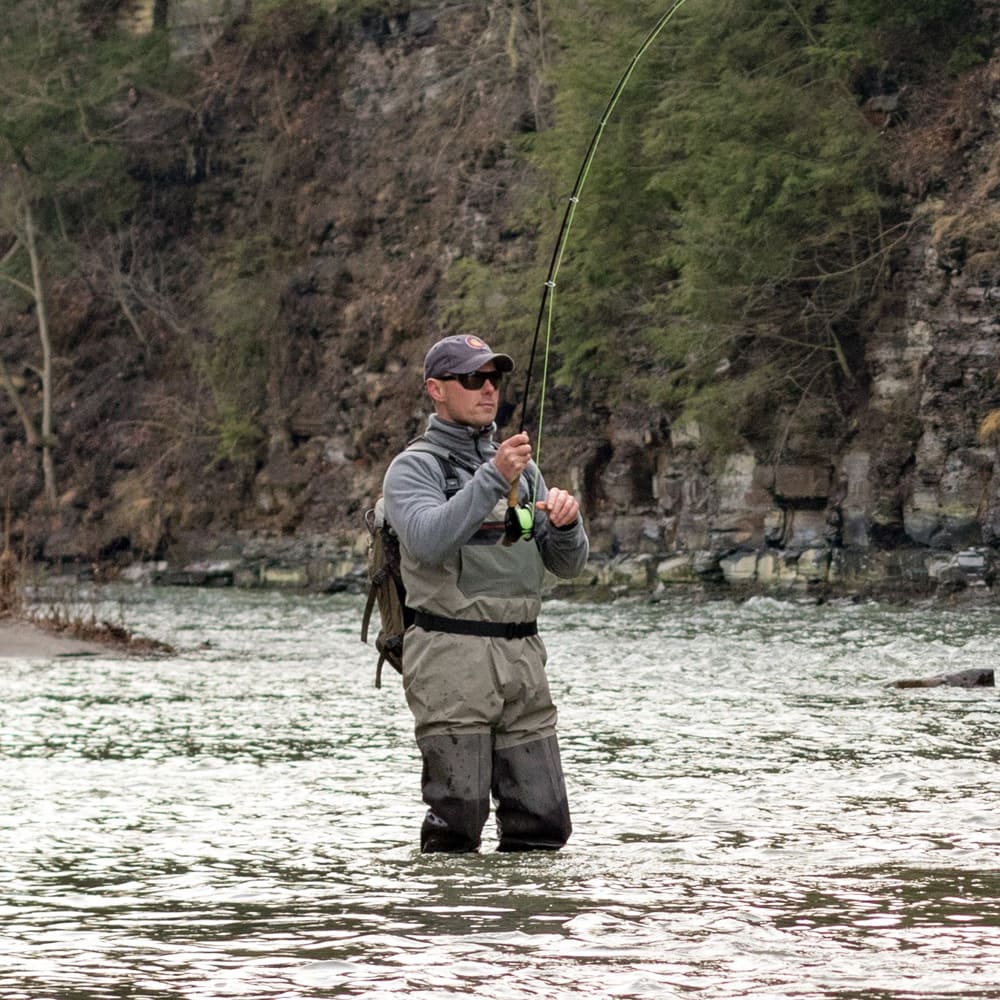 Raised in western New York, Ryan Shea developed a strong connection to fishing at the age of 4 when his grandfather taught him to cast off his dock on Cayuga Island. It has been his passion ever since. With his brothers Tim and Todd and his closest friend Nathan Carr (Nate), Ryan spent much of his spare time through his teenage years fishing the Niagara River and going on summer trips to the Georgian Bay region of Ontario, Canada. However, like many kids raised in Western New York, after graduating high school Ryan developed a wanderlust and desire to experience new challenges.

After earning his BA from the University of North Carolina – Chapel Hill, Ryan also earned a commission as an officer in the United States Marine Corps. As a logistician and project manager, he served his country on multiple deployments to Iraq and Afghanistan and executed nearly a dozen moves throughout the country – fishing where and when he could (but mostly working his ass off) along the way. Somewhere in the middle of all this, Nate picked up fly fishing and showcased his skills to Ryan.

Like relationships between most close friends, there is always an undercurrent of competition and Ryan couldn’t let Nate beat him at something new. However, competitiveness was just the spark – it took only one outing with Nate for Ryan to begin to appreciate that fly fishing is an art. It was beautiful to watch the tight loops of a line well casted and to see the gentle rise of a trout to the fly. It was a completely new world of angles, ecosystems, terms, and personalities. It seemed in many ways to be a more challenging, yet more effective, way to fish than conventional methods. So, with all the time and money he could muster, Ryan threw himself into fly fishing and never turned back.

Armed with a pile of new equipment and facing the challenge of teaching himself how to fly fish, Ryan dedicated nearly all his spare time to the pursuit of this sport with the intensity characteristic of most Marines. Although moving all the time posed numerous challenges to the learning process, the nomadic lifestyle of an active duty service member had a silver lining – it afforded Ryan the opportunity to travel extensively and to develop his skills on some great water across the country. Not being able to grow roots anywhere for more than half your life often causes people to cling tighter to their passions and start to view the world as their home. It is from this mindset that Ryan formed one of his life’s goals – to catch a fish on a fly in all 50 states and 10 Canadian provinces (the bucket list keeps growing though) – and he is nearly halfway there.

After spending more than half his live on the move, the idea of “home waters” started to sound appealing. With a desire to grow roots, provide stability for his family, connect with community, and teach others the joys of fishing and importance of preserving our natural resources, Ryan got together with his friend Nate and started Brookdog Fishing Company back where it all began – Western New York. With knowledge gained from numerous trips with leading guides from across the U.S. and Canada as well as the leadership and organizational skills developed over nearly 2 decades of service, Ryan challenges paradigms every time he wets a line. Passion, intensity, organization, professionalism – all subdued by a laid-back demeanor and a need to play outside. 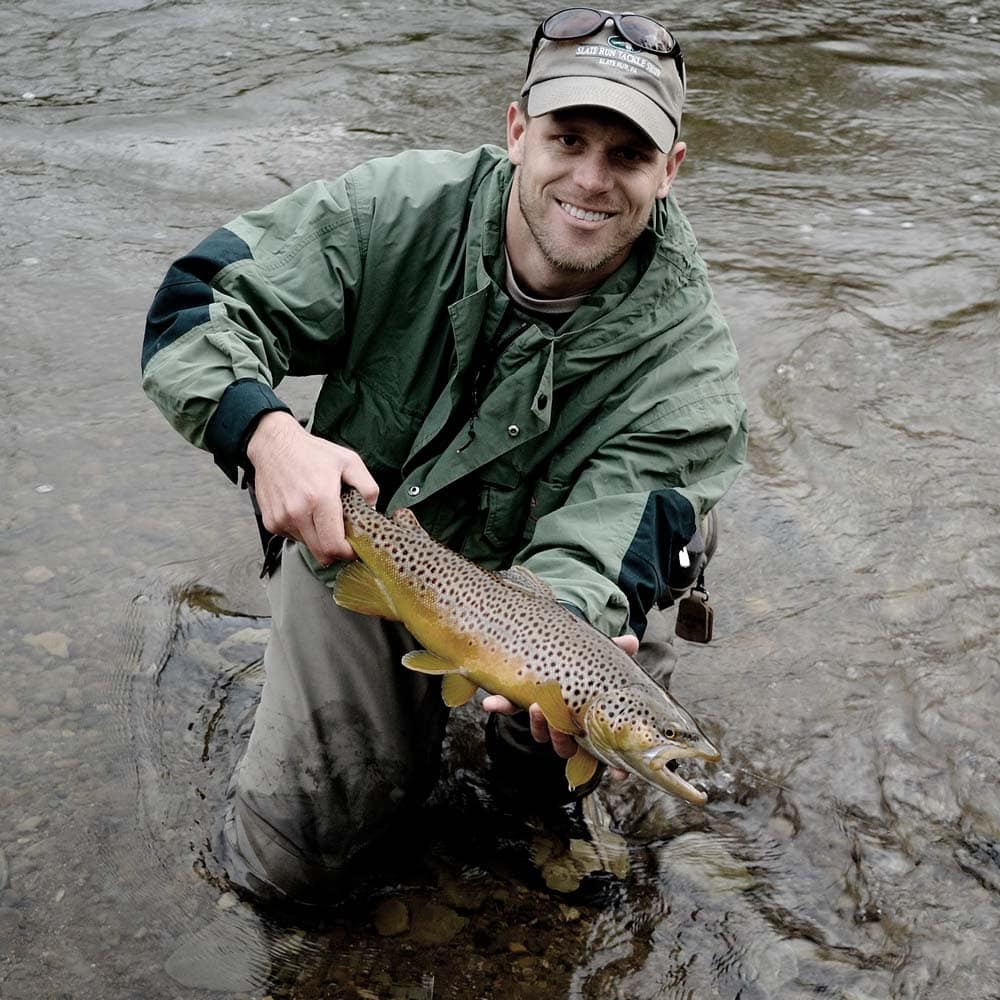 A native Buffalonian, Nate Carr was born and raised in western NY. For as long as he can remember, fishing has been a part of Nate’s soul, a pathway to connect with that which we so often lose touch – our natural surroundings, the present moment, and our primal core. His father introduced him to the sport as a small child; fishing for bass and walleye on Niagara River and trout on the many freestone streams in western New York’s Southern Tier. Growing up in Grand Island, NY Nate was literally surrounded by water, a detail that was never lost on him or the Shea boys (Ryan Shea and his brothers), with whom Nate was considered the 4th brother. Summers were spent probing the Niagara River from every patch of shoreline accessible by foot or bike, fishing ponds for bullhead and bass, and annual trips to Georgian Bay. In his early teens, Nate dabbled in fly fishing with his father while visiting family on the Miramachi River in New Brunswick but it wasn’t until his late teen years that the “bug” really took hold and fly fishing became his passion. This would begin a journey to learn and become proficient at what would later come to, in-part, define him as a man.

While earning a B.A. in Communication at the University at Buffalo and before life thrust “adult responsibilities” upon him, Nate took full advantage of his free time by honing his skills fishing for trout and steelhead in both NY and PA. Mostly a solitary angler, Nate was self-taught and always found it far more rewarding to figure things out for himself as opposed to being spoon fed. He contends that, in some cases, it is better to approach fishing without the contamination of the collective fishing community’s paradigm, being ignorant to what “can’t be done” allowed him find success in unorthodox techniques and locations. Through this, he came to learn his local waters well and an itch to explore began to develop.

Nate found himself travelling regionally to fish the hallowed waters he read about so many times in magazines and watched on TV shows: The Beaver Kill, Delaware, and Willoweemoc in NY’s Catskill mountains; the West Branch of the Ausable in the Adirondacks; Kettle Creek, Slate Run, and Spring Creek in Central PA just to name a few. This thirst for exploration grew with every trip to a new destination and when his childhood friend Ryan found the same passion for fly fishing and travel, the two began planning and executing trips across Canada and the US to experience many of the highest quality fisheries the continent has to offer. Amidst the travel to new and far-off places, Nate always kept his home waters close to heart and began to approach those waters with new techniques in favor of quality over quantity.

Finding and figuring out how to catch trophy trout and musky became Nate’s focus in his late twenties and early thirties. With his Sales career and family demanding more of his time, Nate felt it was more rewarding to spend his limited time chasing the “white whales” of his rivers and he soon became adept at it. Though he loves casting dainty dries to wary trout and the feel of a silky brookie in his palm, you are more likely to find him throwing big articulated streamers for top-of-the-food-chain predators. Be it big, buttery browns or menacing muskies, Nate has a knack for hunting these illusive beasts.

Through the years Nate and Ryan always talked about starting a fishing company and dreamed of turning their passion into a calling and career. With Ryan’s return home to western New York, the pieces aligned to make that dream a reality and Brookdog Fishing Company was born. Today Nate enjoys sharing his passion and knowledge for fly fishing along with his love for the outdoors with clients from all walks of life.

Inspired by camaraderie between brothers and close friends while fishing and camping in the wilderness of New York and Pennsylvania, Brookdog Fishing Company’s goal is to provide our clients with the best fishing experience possible while developing lasting friendships along the way. Let us help you explore and better define the, “best fishing experience possible,” while exchanging ideas, trading stories, and making plans for trips to come.