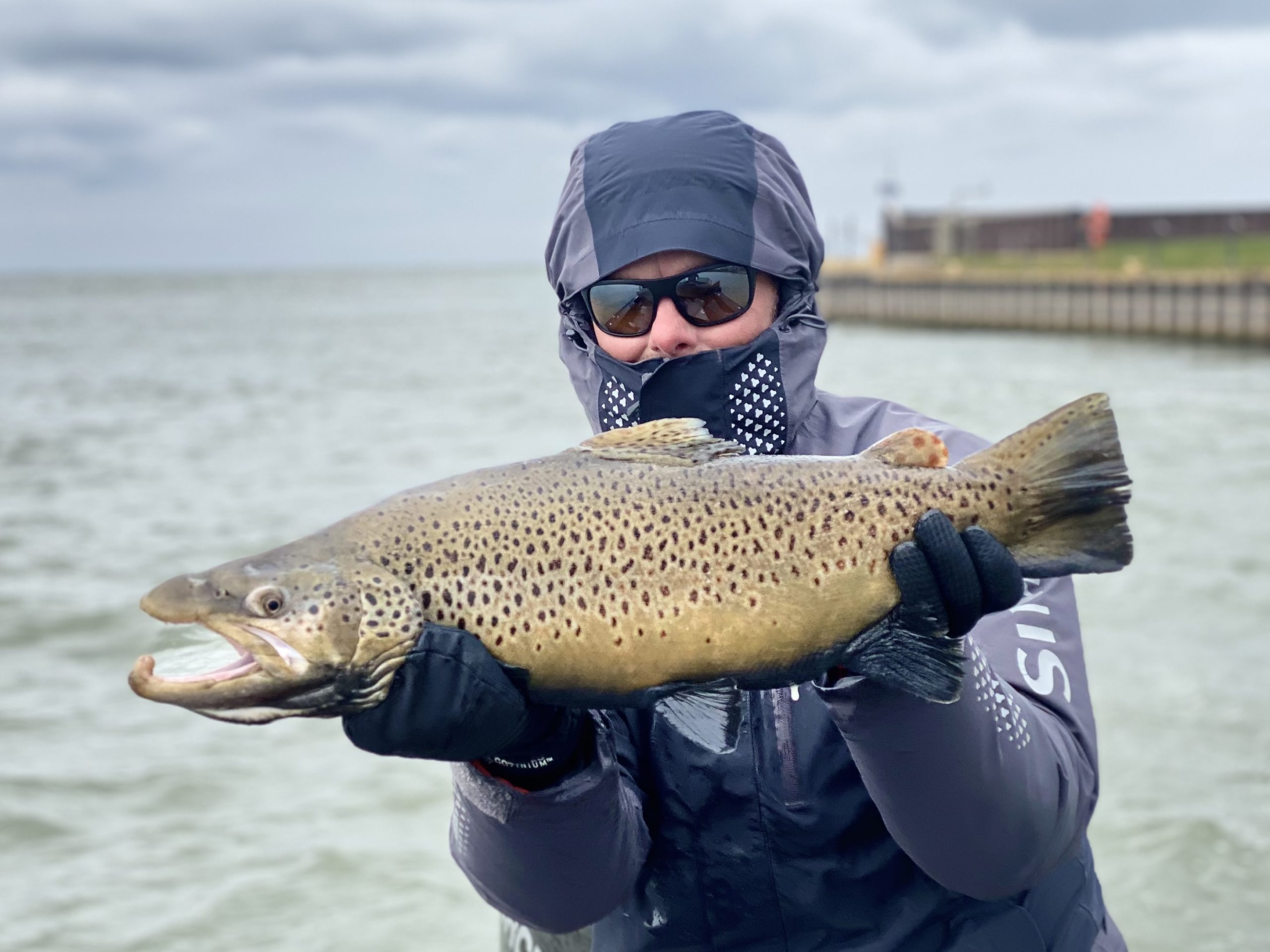 Days on the Water: 2
Who we fished with: friends, clients
Where we fished: Lower Niagara, Inland Lakes
What we caught: Brown Trout
Tactics: beads, artificial minnows, flies

This past week was trying to say the least. Since the observations from the water I offered a week ago, the wind blew hard until yesterday. Wind from last Sunday’s storm blew down trees and took out the power lines in part of our neighborhood (including our home) – resulting in the loss of power for 24 hours or so. Waves nearing 20’ built up on Lake Erie and smashed into the Eastern Lake Erie shoreline doing considerable damage. So…yeah…the water turned brownish gray and because the wind kept up all week, albeit at a slightly slower speed, it stayed that muddy hue until today.

We managed to get on the water 2x this past week. On Wednesday, I fished the lower Niagara with a friend to see what would happen. There was a lull in the wind that day and I felt the shack nasties creeping up, so we gave it a shot. The water was muddy – around 3” of visibility – far from ideal. The buck brown trout in the feature photo below is all we caught after 4 hours of trying. We learned a couple things, had a good time, absorbed some sun, embraced crisp air, and ultimately kept the shack nasties at bay. Yesterday, Nate and 2 of our new clients made an attempt at musky on the fly in a couple of the inland lakes. That’s always an interesting option this time of year. If the wind is down, fishing for muskies in these natural, small lakes around Western NY is pleasurable even if no fish come to hand that day.

Observations from Confinement – this Past Week (16-22 Nov)

Although I hoped I would NOT have the occasion to write any more observations from confinement, I knew it was coming at some point. It’s unfortunate but such are the times. Erie County isn’t in complete lockdown – but the state government made the call to bring the county one step closer this past week.

Like many places across the country, rising Covid-19 infections rates alarmed our state government such that they made the call to go “full virtual” with schools in our area this past week (our daughter had been physically attending school 2x weekly – not any more per the state mandate). Restaurants around the Western NY bubble were forced back into take out and “outdoor seating only” mode – not a real choice when it’s cold and the wind is blowing. Gyms had to close their doors again too. Other establishments, that would normally be permitted by the state to remain open when infection rates are where they are now, closed preemptively. A few of our clients opted to do the same – deciding it would be best to reschedule for the spring instead of venturing into/dealing with the inconveniences of an outside world where Covid-19 is back on the rise. For my thoughts on this – tap/click this link.

Less than a half mile away from where we live, across the invisible line that is the border between Erie and Niagara County, these new restrictions DON’T apply. Choose your adjective to describe this situation – it’s maddening for me to try to make sense of it, especially when considered at a larger scale. Thankfully, the state government has not made the call to shut down charter fishing.

Note: notice I used the word, “thankfully,” above. I thought about changing it immediately after writing it but decided to jot down the little mental exercise I went through to keep it as is. Who am I thanking? In the context of the sentence at hand, it would appear that I’m thanking the state for allowing us charter captains to continue to operate. That emotion feels strikingly similar to what I would feel when mom and dad let me go outside to play with my friends after being grounded. So, let me phrase this very carefully, it’s unsettling to have these kinds of emotions when thinking about local (or federal for that matter) government. The word, “vulnerable,” comes to mind.

What I’ve Been Doing to Stay Sane

Little to no fishing and face to face interactions with friends, family, and clients leaves me vulnerable to the trappings of sedentary life – chief among them being poor mental and physical health. Since it wasn’t that long ago when we were in the same situation (think back to this past spring), I reverted to a pattern of life very similar to that period.

I’ve been trying to stave off poor mental and physical health by keeping my mind and body as engaged as possible. With the gyms closed again, I’ve gone back to a home-based exercise routine that involves a lot of running, tire flipping and dragging, and body weight exercises. Although I lack the equipment (and protection from the elements) offered by a gym, my home workouts are still pretty taxing. As the temperatures continue to drop (and the pandemic endures and the gyms remain closed), outdoor exercise is going to get harder. However, working out in the cold and wind should increase my tolerance for these environmental conditions and in turn, improve my ability to guide throughout the winter (or I’ll get hypothermia lol).

Keeping the mind engaged is a different challenge. I have a couple blogs I’m trying to flesh out so writing has been part of the solution. I’ve also been reading a lot. Since our last observations, I’ve read Steven Rinella’s, American Buffalo, and Dan Flores’, Coyote America – both awesome books if you’re interested in the natural history of our continent and how humanity has shaped it. Most striking about both is the notion that every time people believe they can control/are in control of a natural system we’re left humbled.

We’re booked most days and hope to be on the water for all of them. Temperatures will be much cooler (YES!!!) and the wind will be slow enough to allow the water to clear. After a week (+) of little to no angling pressure, the fishing should be great. I’m most curious about how/if the populations of fish shifted – are the browns finally feeding readily, are there more steelhead spread throughout the system, are the lake trout wrapping up their spawn? I hope the answers to all these questions are yes! Stay tuned to find out.

We pride ourselves in producing and distributing up-to-date, useful, and entertaining content. Subscribing to our mailing list will provide you with weekly fishing reports, the occasional blog, and information on any seasonal specials we may be running. We’re confident you’ll find this information useful for planning your next trip or just taking your mind off of work for a few minutes.