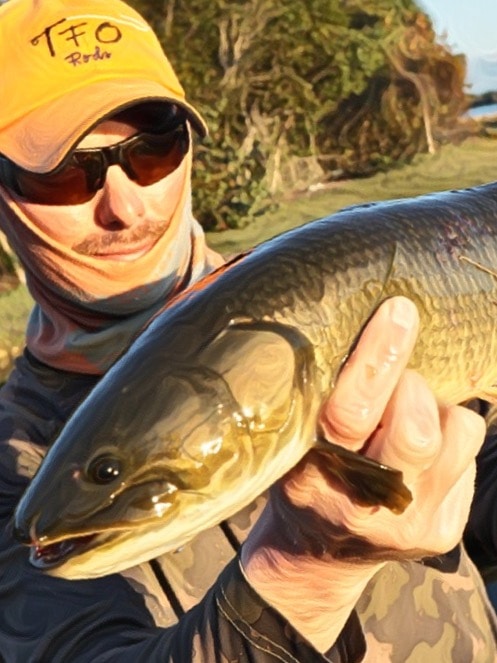 Bowfin: Add These Dinosaur Fish to Your Bucket List

Earlier this year, a fishing buddy of mine, Chuck Yauch, introduced me to the idea of fishing for bowfin around the Buffalo Niagara region.  Up to that point, I hadn’t really taken the idea seriously.  Nate showed me some pictures of them in spawning colors years ago (they’re incredibly beautiful by the way).  He and I talked whimsically about going down to some marshes in PA to pursue them but it never came to pass.  However, my love for natives put this dinosaur fish on my bucket list – somewhere on the bottom where it loomed until Chuck brought it up this past summer.

Allegedly, there are some reliable spots where a venturing angler can catch a bowfin around my home waters here in the Buffalo Niagara region.  Late spring/early summer is the best time – so I’ve heard.  But, you need the type of boat that can get you shallow, back into the marshes, and over some obstacles.  I’m not going to lie – that’s one of the reasons I purchased my Flycraft.  Since it’s still winter here, I’ve just been  biding my time.  Then my trip to Florida happened.

The intent behind the Florida trip was to shed the shack nasties of the WNY winter by pursuing peacocks in warm weather.  But, anyone who’s fished in south Florida knows that some seriously random fish can come to hand during a day on the water.  That’s where bowfin entered the picture.

Our guide in South Florida, Scott Rose of Miami Peacock Adventures, took us out to the Everglades for a little adventure.  He put us on quite a few peacocks and largemouth  bass.  After getting our fill, we became more interested in the “exotics.”  Gar, myans, etc came to fruition pretty quickly.  Then, as we wandered up to a little pond, I noticed a rather large fish.  Scott quickly identified it as a bowfin.  I was stoked.

The other day, I posted a picture of my first bowfin.  The post had little flair so I decided to dedicate a blog post to my second.  Although smaller, it’s colors were more spectacular.

I’m now smitten by these native dinosaurs.  They fight hard, smash you’re presentation, and from what I hear, they love frogs.  I’m looking forward to taking the Flycraft into some of my home water marshes in a few months to pursue these guys on the fly.  Give us a call if you want to give it a shot as well!