The Dog Days of Winter – is That a Thing? 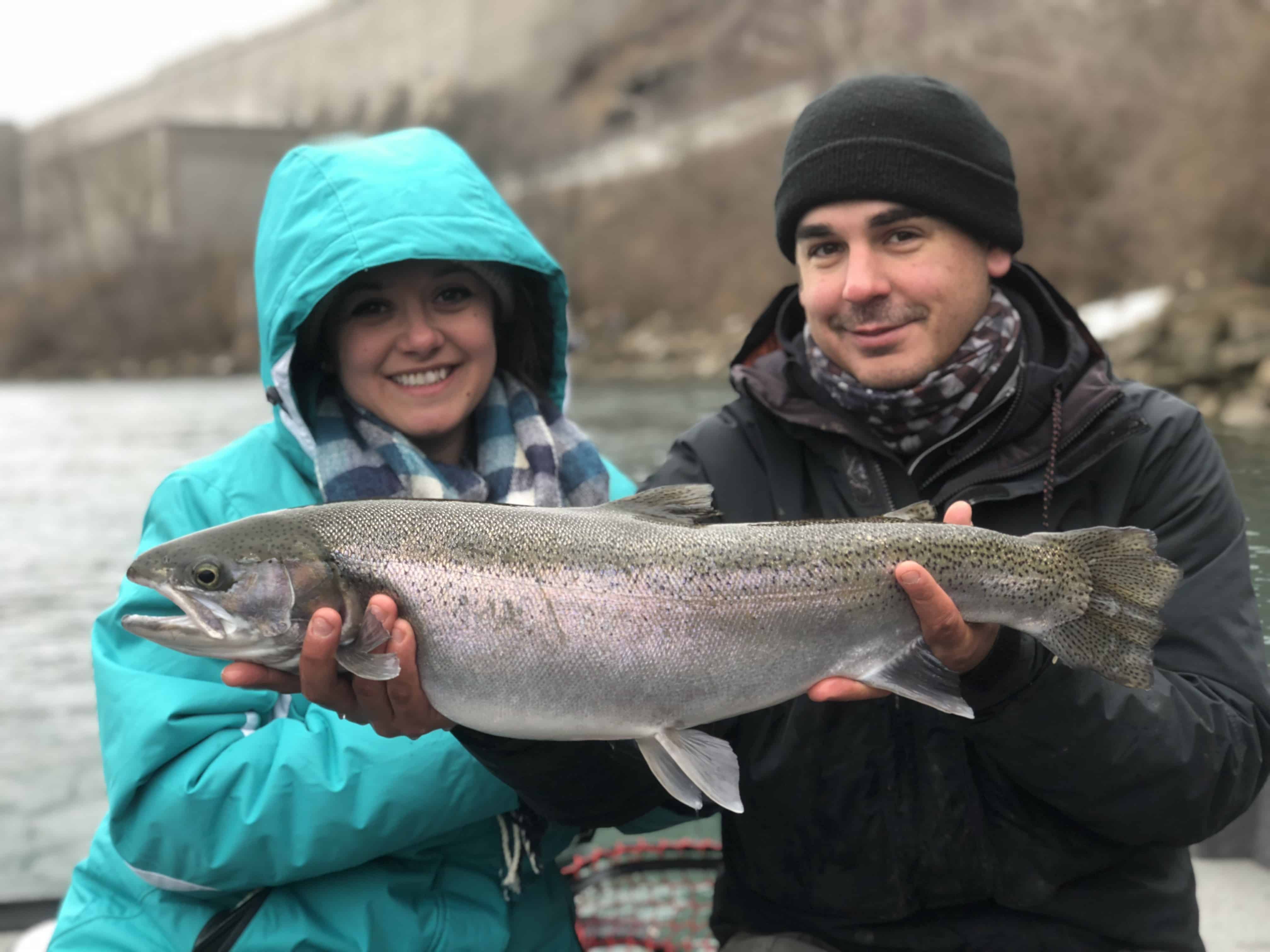 Are the dog days of winter a thing?

I was out fishing on the Lower Niagara River with Chuck and his bride Sara a few days ago when the concept of the “dog days of winter” popped up. Not even a week earlier, he and I both had strong days in the same spot using the same tactics. That day, however, action was sporadic. Not so slow as to make us lose interest but slow enough for us to start considering if the “dog days of winter” was a real thing. This short but interesting conversation got me wondering if there was anything I could do to prevent or minimize prolonged patterns of slow activity. I haven’t landed on a firm position on this idea yet, but I did determine that a look at myself would be a great place to start.

Dog Days or Not, a Nice Steelhead Always Brings a Smile to your Face.

Do Fish Experience the Same Lulls We Do?

Back to the day Chuck, Sara, and I were on the Lower Niagara River. If you’ve never fished this place before, click here to see what it’s like. This time of year, we fish the Lower Niagara River for steelhead and lake trout. The steelhead are there staging for the spawn and the lake trout are there recovering from the spawn and getting full on steelhead eggs and bait. Bottom line – there are many fish around – the challenge is determining what they want to eat. We tried every presentation and every lure/bait we had in the box and could only just pick away at them. What’s up with that? Why did they turn off so quickly? They are all still down there – we can see them on the sonar so why the hell aren’t they
biting? 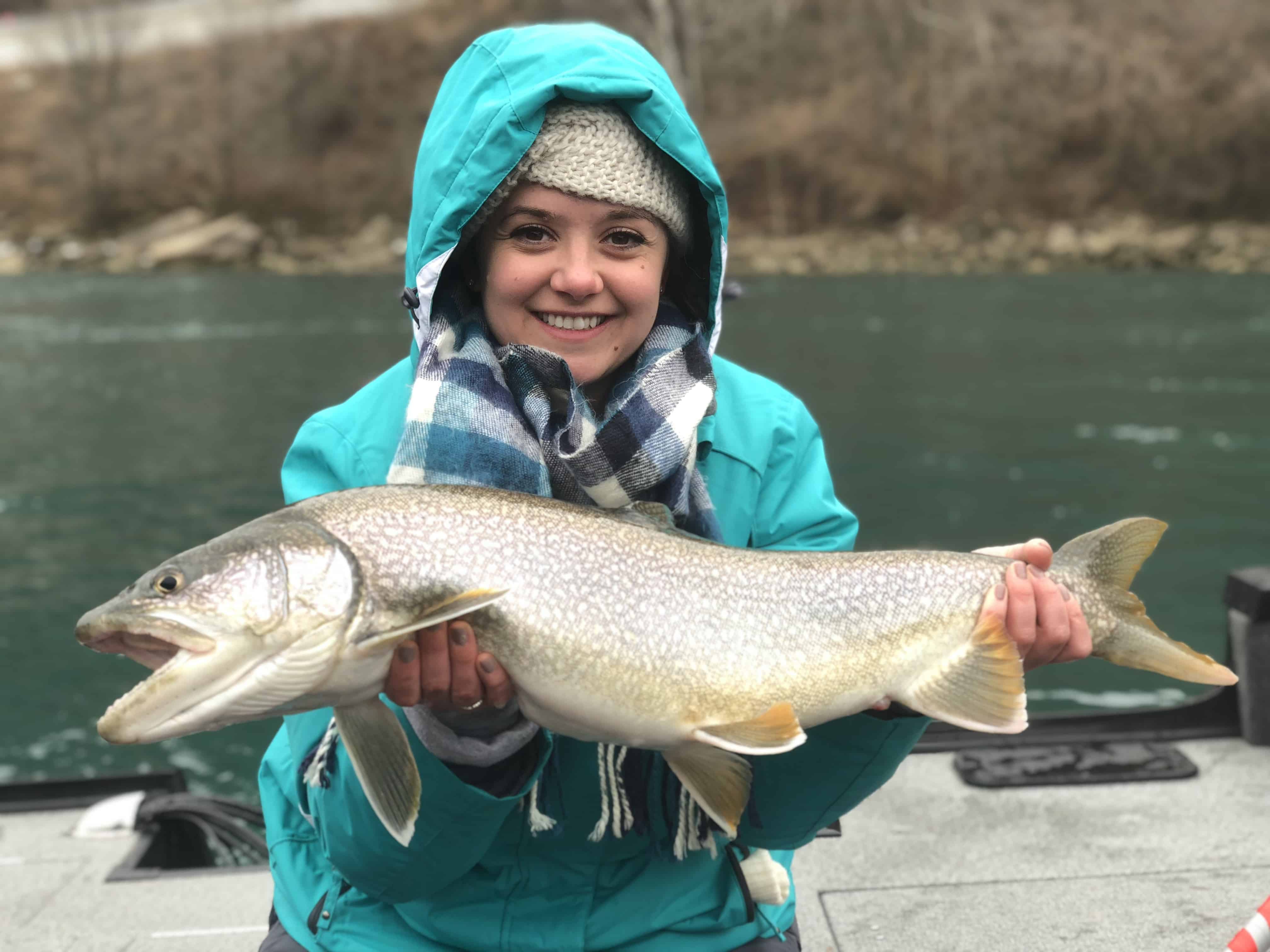 Sara with a Nice Winter Laker

This lull is what we labeled as the dog days of winter. I don’t typically use the phrase, “dog days,” to describe anything. However, I’m guilty of empathizing with people when they talk about the dog days of summer. The images that pop into my head when I think about the dog days of summer are a bunch of sweaty bodies hanging out on their porches, drinking something cold, just hanging in there. Sluggish. Lazy. I think (read as I’m hoping) that fish behave the same way when they find themselves in the middle of a stable weather pattern and a lot of heat.

So what images pop into the dome when contemplating the idea of the dog days of winter? I conjured a few. If you’re not from the Buffalo Niagara Region or really any of the Great Lakes bordering states, you’ll likely feel sorry for us:
– A slumped over figure
– More than a few pounds heavier than 6 months ago
– Very little skin exposed/likely wearing a hoodie and sweatpants
– The skin that is exposed is pasty
– Mindless gaze on the face caused by binge watching shows on Netflix/Amazon Prime

Mindfulness is the Key to Breaking the Cycle

I want to believe the fish are in the same situation in the middle of winter. Many of them have been in the Lower River for a few months now. They’ve seen all matter of tackle and debris flow by them. They’ve seen more than a few of their compatriots move to grab what they thought was food only to be violently pulled away in a flurry of chaos. I think it’s safe to say they are in a bit of a rut. Maybe I’m humanizing them too much (I probably am). Maybe I’m not. Bottom line, I have to assume this is the case and do everything I can to prove otherwise. 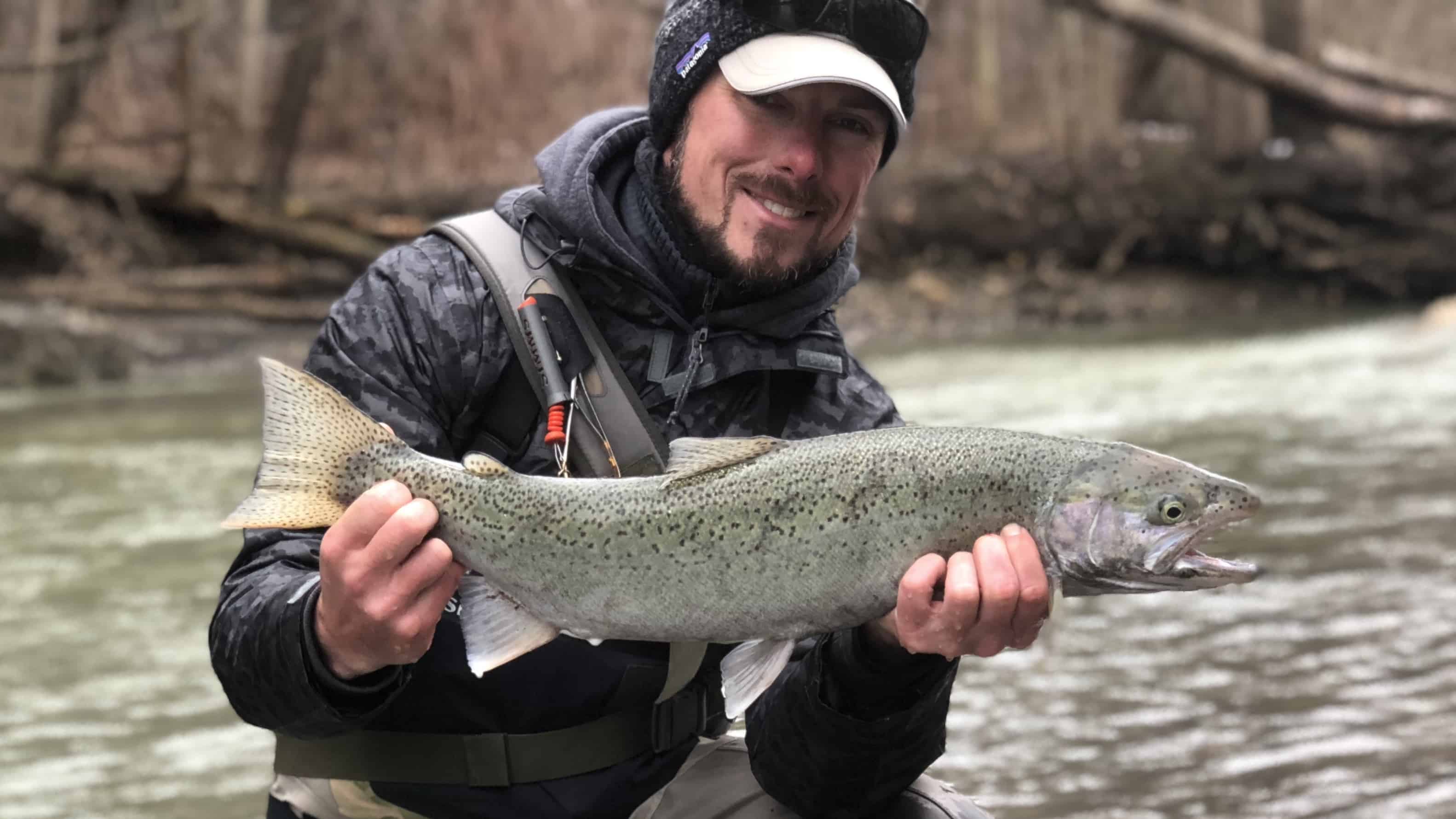 Picking away at the Tribs for Steel 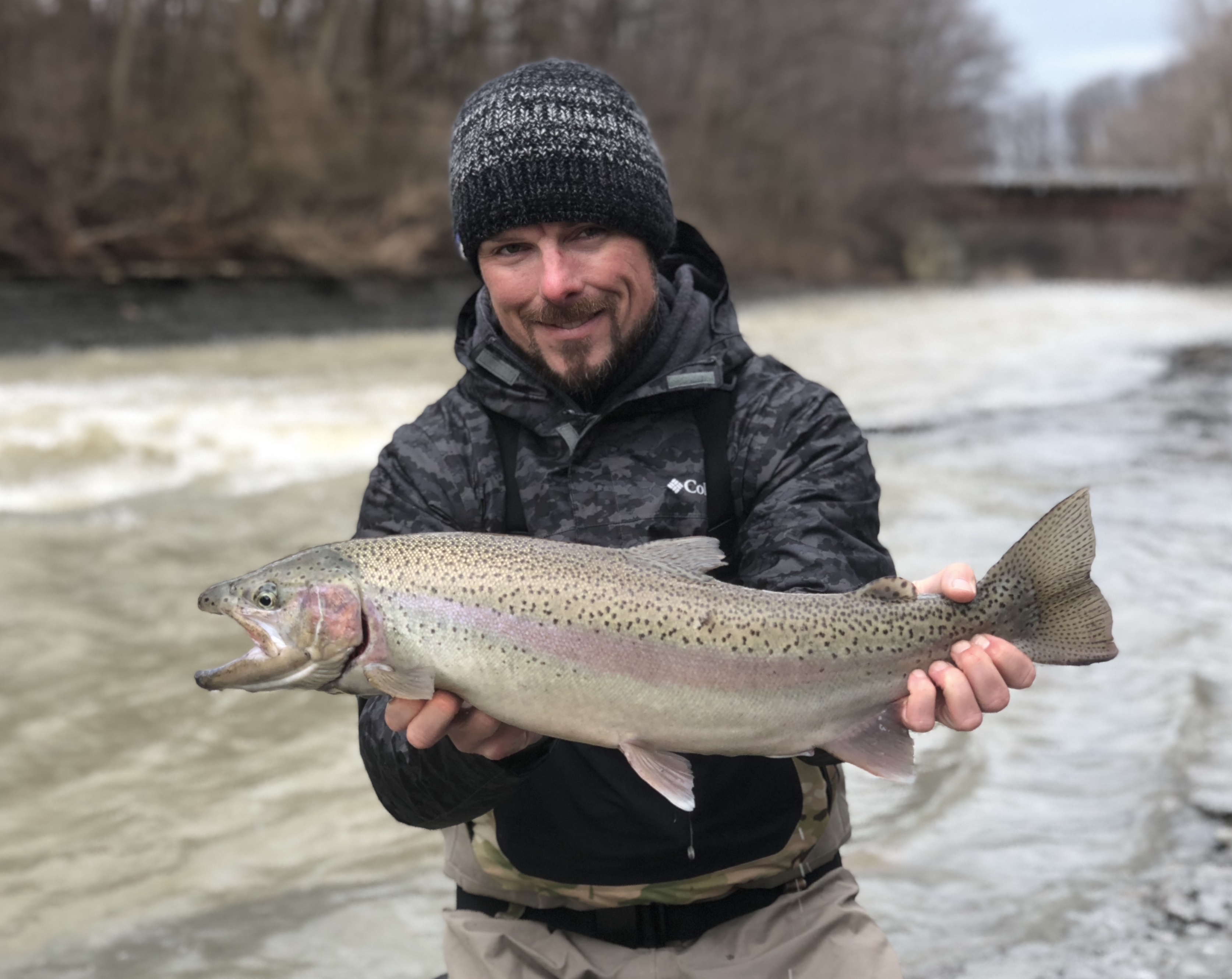 Proving otherwise involves a lot of thinking and physical activity. You have to change speeds, angles, tackle, bait, drifts, etc. – and hope you figure out a pattern. Your eyes have to capture and your mind has to absorb all the little details. Your hands will likely be cold but you can’t let that prevent you from changing lures or bait. You’ll likely be freezing but you can’t let that affect your situational awareness. Remaining mindful throughout the struggle is the best way to stay engaged and your best shot of figuring out a pattern.

As charter captains and guides, we spend a lot of time on the water and all of us experience slow periods in fishing. Sometimes it’s only part of the day. Sometimes it can last a couple days. For the most part however, we catch fish regularly (we’d better – it’s our job). That’s not to say it’s easy, just that we spend a lot of time doing this so we can get things dialed in a bit faster than the average angler.

When we find ourselves in a slow period, all we can do is a better job of taking notice of what’s going on and experiment with ways to combat the lull. Most of the time we’re successful. Sometimes we aren’t. Those hard periods are the gems – the learning opportunities – OR they are just a message from Mother Nature reminding you that there is a warm couch back home and that you’d be better off going there than floating down a river in the cold. My mother would tell you that listening to what she said was never a strong suit of mine.

Dog days of winter or not, we’ve been on the water.  Yeah, it was a bit slow toward the end of this past week.  All that rain and high temperatures melted every bit of snow and completely saturated the ground and our regional, Great Lakes tributaries.  Just about everything was blown out over the weekend but we hung in there, tried a bunch of techniques and flies, and managed to land some fish.

Although the tributaries were a bit problematic due to high water, the Niagara River didn’t have that problem.  Devils Hole is still running clear and fishing well for this time of year.  Below the power authority, all the mud from Cayuga Creek, the Erie Canal, and Buffalo Creek caused by the rain and snow melt is clouding up the water quite a bit.  The upper Niagara River, although clear, is full of icebergs now as yesterday’s gale force winds blew them downstream from Lake Erie.  We won’t head back out on the Upper until that stuff clears out. 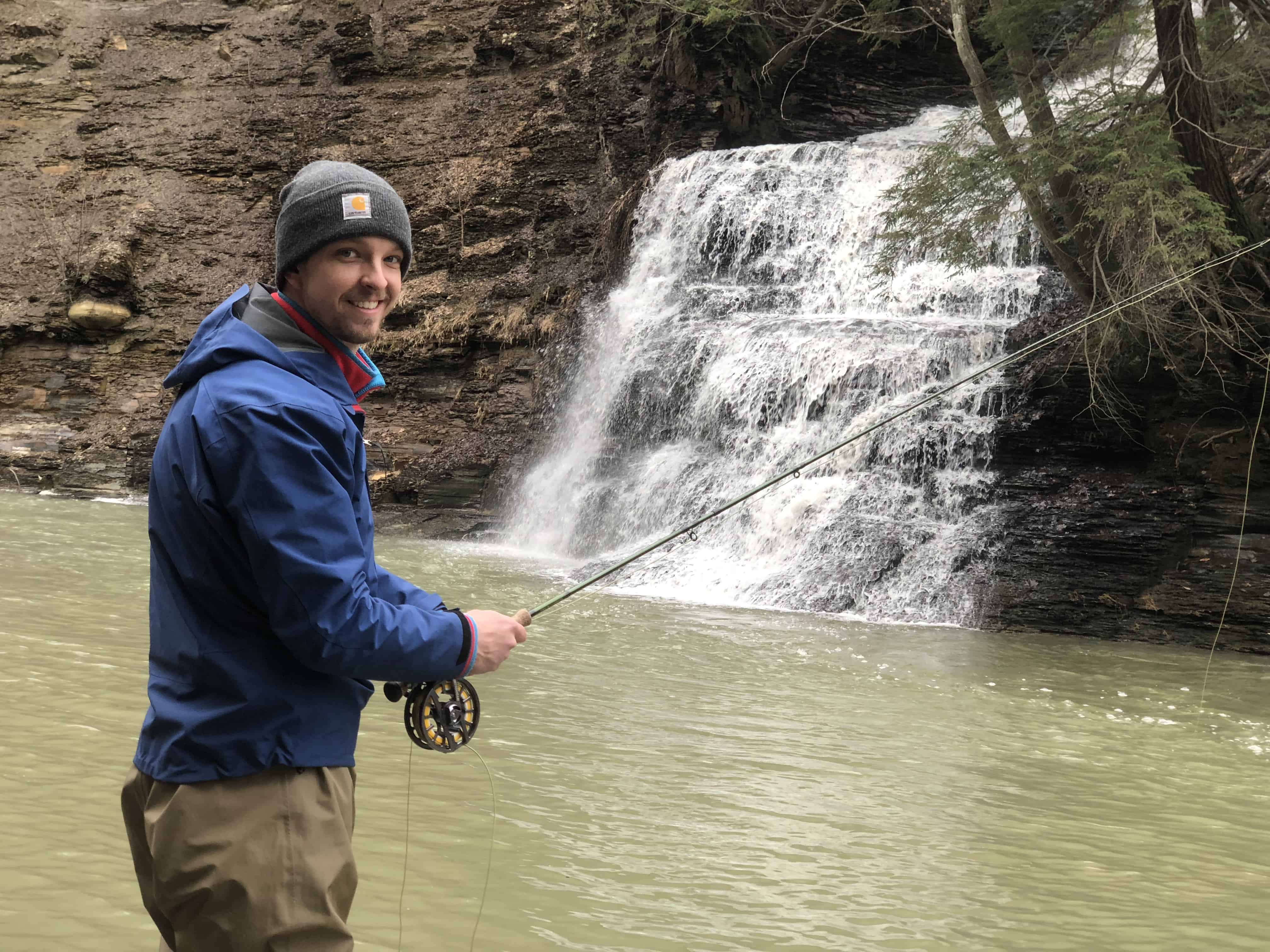 Josh – just happy to be out there. 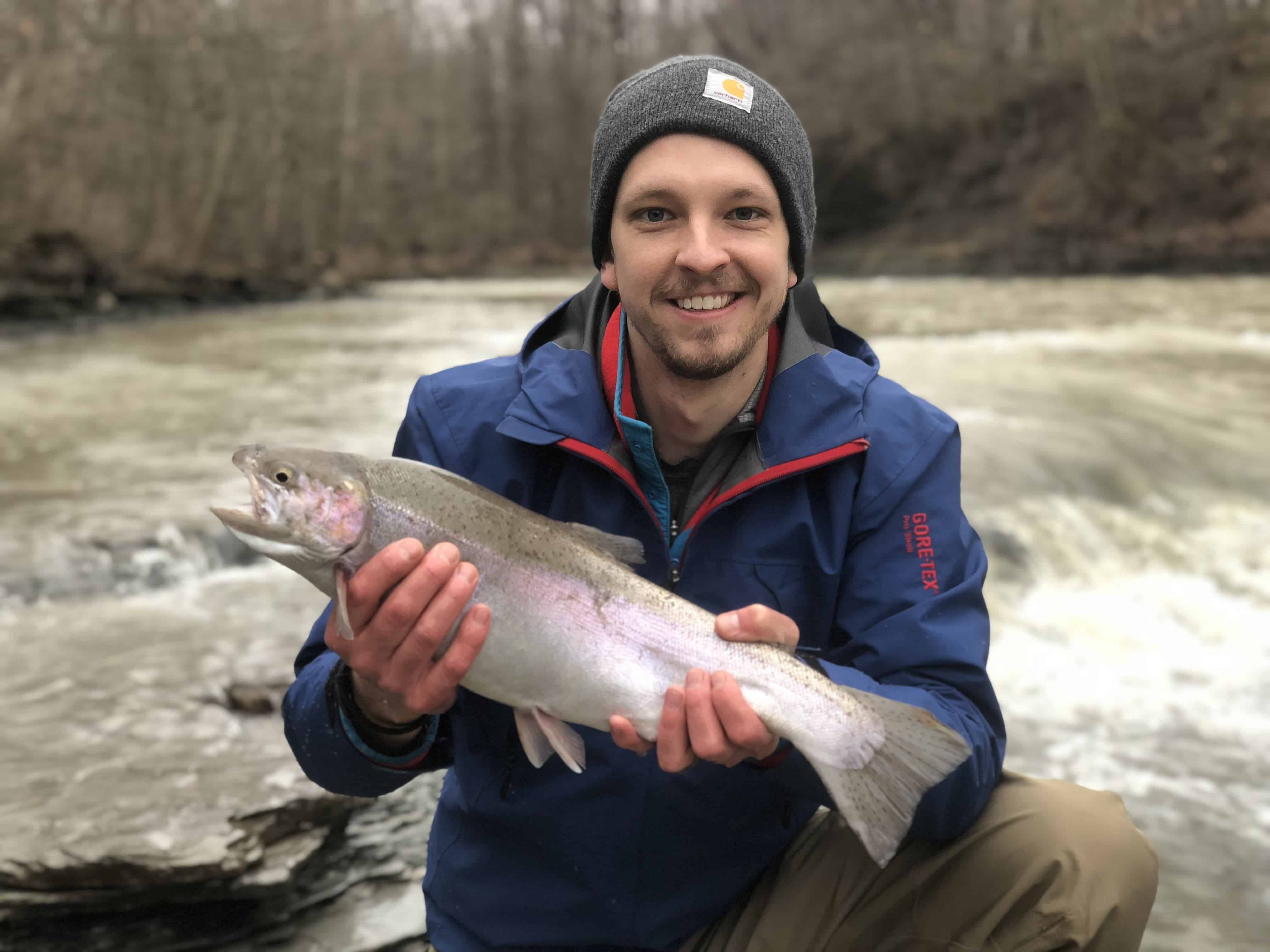 Josh – this was the first time he had ever gone fishing and he managed to land a steelhead on a fly rod. Nice work, Josh! 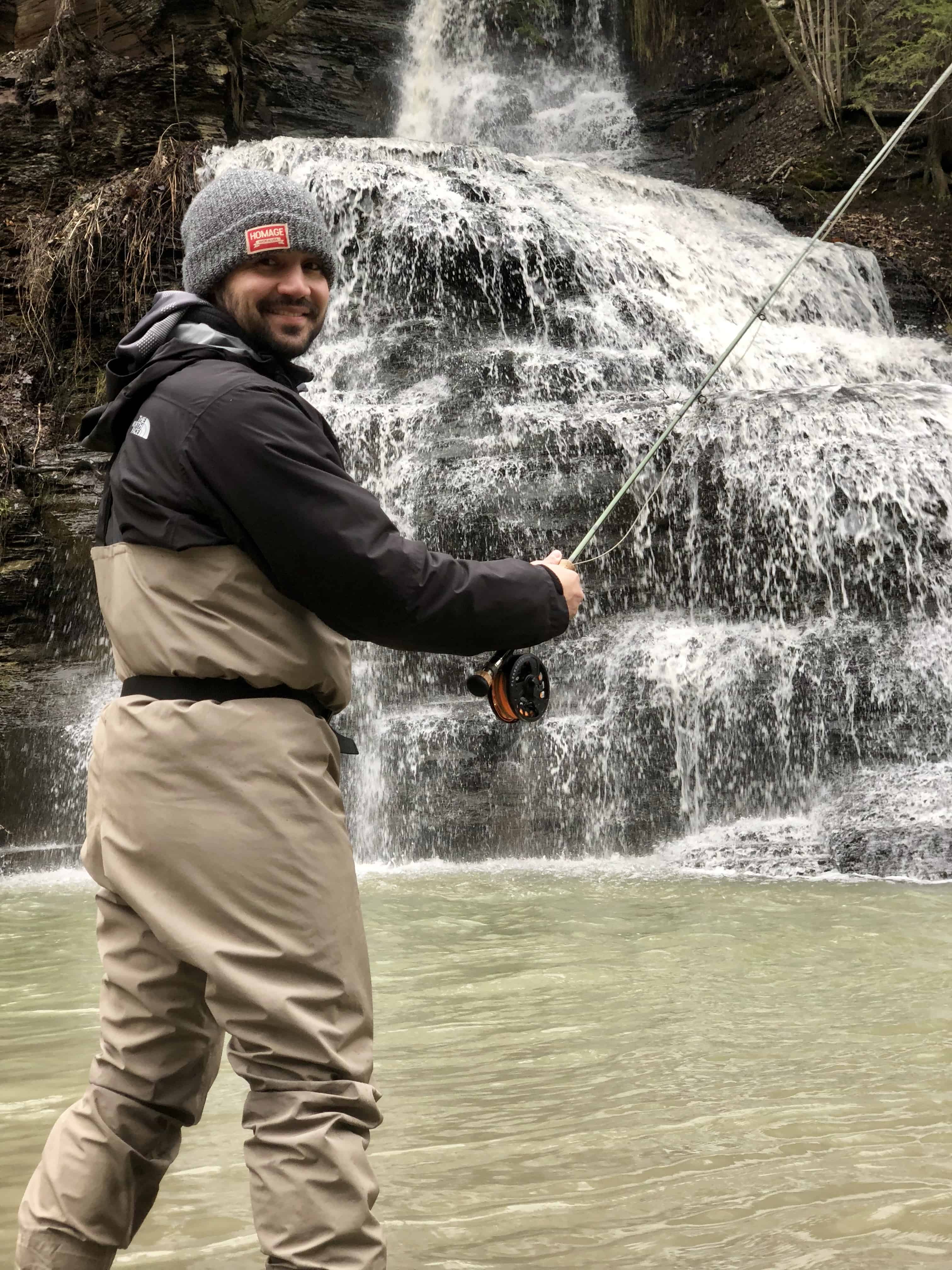 Ruben – having a blast. This was his first time fishing – EVER. He hooked 3 steelhead – all of which broke him off (and bewildered the hell out of him). We’re glad he had fun. 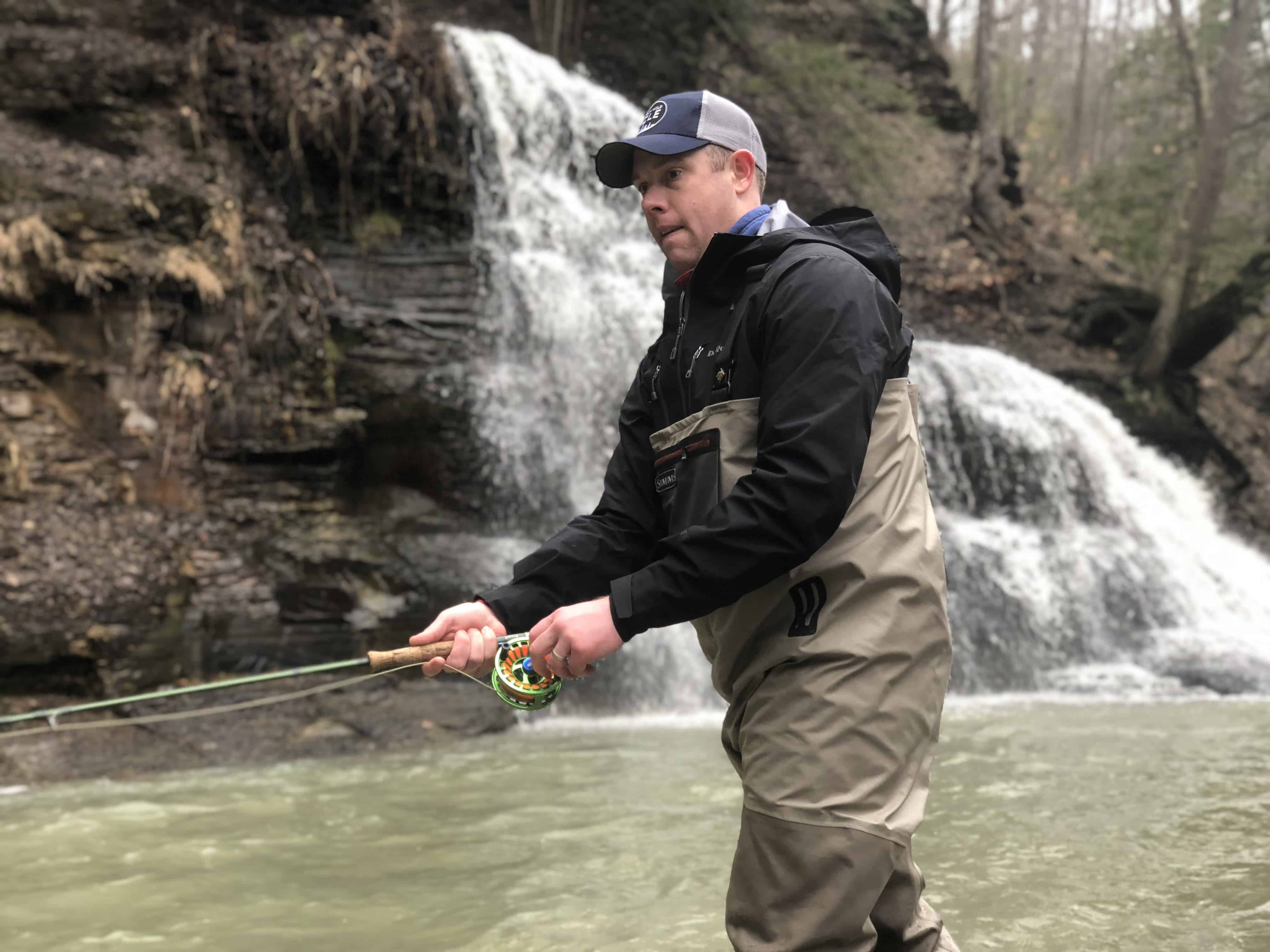 Mark – intensely trying to figure this fly fishing thing out. 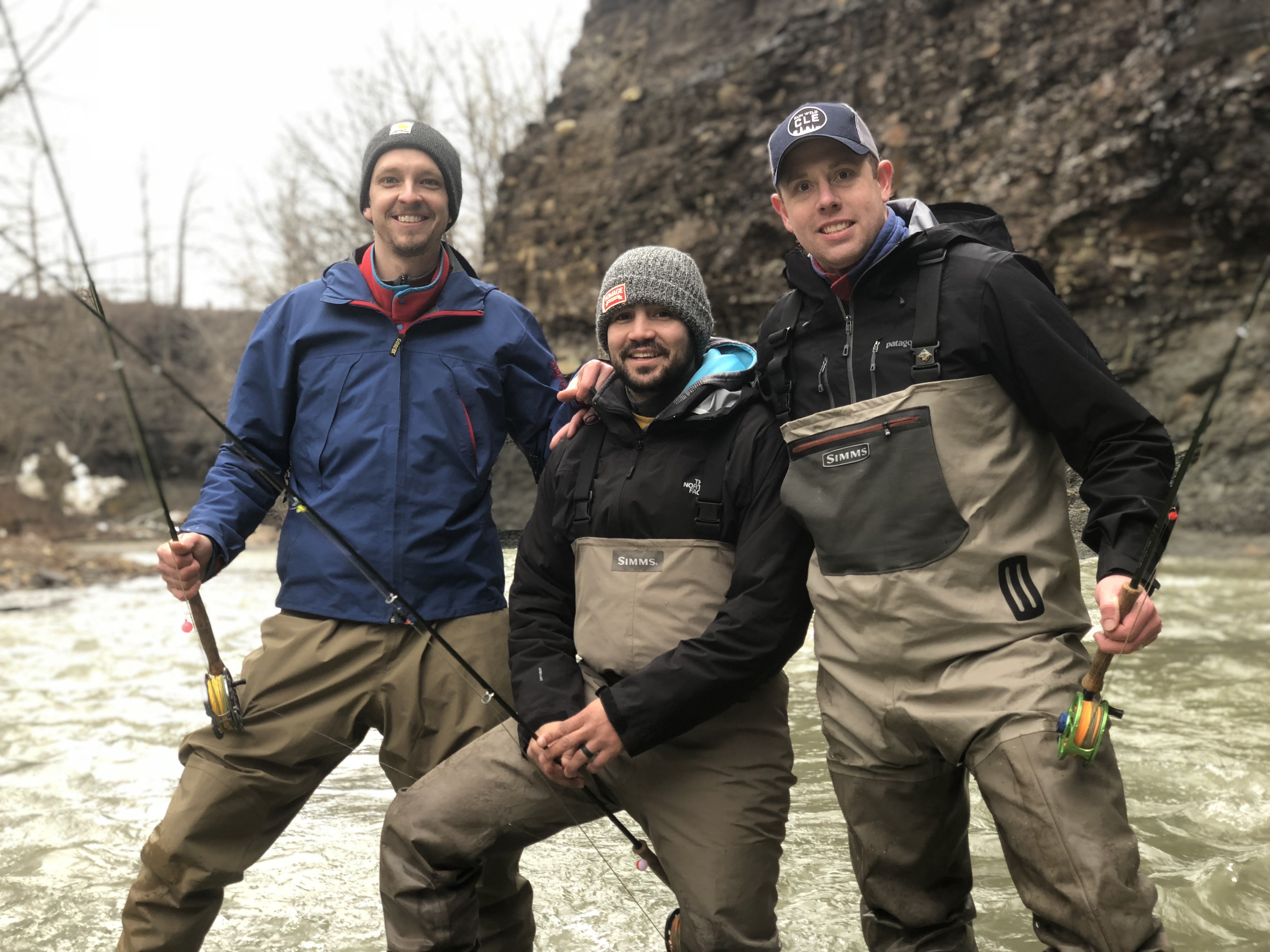 A Bro Vacation on the Water – Mark, Josh, and Ruben visiting WNY from Cleveland. They planned on going skiing – Mother Nature had different plans

We are about to experience a very mild stretch of water.  The tribs will clear up quickly now that all the snow is gone so we plan on spending some time walking over the next few days.  The Lower River continues to fish well for steelhead and the sporadic lake trout so we’ll be spending time on the big water as well.  If you find yourself lookin for a cure to the dog days of winter – give us a call!