Mindfulness in Angling – a Momentary Lapse of Insanity 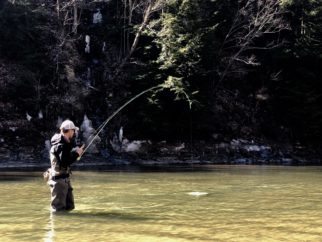 Mindfulness wasn’t even a consideration for me during the past couple years on the water. When I started guiding, my goal was to show my clients a good time and to give them every opportunity to catch fish.  Although how to entertain clients is an awesome topic, in this article, I am going to address the second part of that goal – getting fish in the hands of our clients.  Toward this end, I thought a lot about where to go, what bait to use, what gear works best, and how to teach our clients to catch fish.  If I’m being honest with myself, my priorities were in that order.  Since then, after having accumulated a few more years of knowledge, I’ve shifted my priorities toward improving the angling skills of our clients.  For me, by encouraging mindfulness – noting one’s emotions and the sensations one feels – I’ve watched our clients improve their angling ability in short order.

Mindfulness Doesn’t Have to be Heady

If that first paragraph came off a little heady, give me a chance to explain.  I was on the water the other day with a 36-year-old man who had never fished a day in his life.  Few things excite me more than this opportunity.  To teach someone a skill.  To create anticipation.  To see, when it all comes together, that thrill, fear, panic, and intrigue, of a person’s first violent connection with nature.  It’s a day where that person, for the first time in a long time, is in the moment.

So back to our new, virgin angler friend.  Our friend and devoted client, John, brought him into the fray with stories of big fish and pictures to match.  The conditions looked promising, so the pressure was on for me to teach him enough to catch his first fish.  Action was consistent that day.  In fact, our friend lost his angling virginity to a hen steelhead on the third drift.

Then came that point in the morning that almost always happens when there are multiple anglers on the boat.  The angler catching the least amount of fish, in this case our budding angler, asks the question, “What am I doing wrong?”  Man…that’s an awesome question.

WARNING!!! I Don’t Have a Good Answer

Time for a couple of anecdotes for reference – many of my colleagues and fellow anglers likely have experienced these situations:

All seemingly random outcomes.  That’s Mother Nature. That’s what I love about it.

Still, it’s not ALL random, at least I hope it isn’t.  I’d like to believe I can help turn the odds in our favor if I can teach every angler on the boat a little something to help them catch more fish.  I believe I’ve accomplished this, to some extent, on several occasions.  I’ve watched new anglers catch their first fish moments after teaching them how to cast and I’ve seen regular clients step up their game on every outing.  However, I still don’t have a satisfying answer to that question.

What Just Popped in there, Ray?

Something occurred to me during the outing I mentioned earlier – after receiving the question, “What am I doing wrong?”  It’s a question I ponder A LOT – about my clients and about myself.  On this occasion, I believe I delivered a good response.  I told him he wasn’t doing anything wrong – I had been watching him like a hawk all day.  I went on to tell him that what he was in search of was something intangible.  That “something” can take angler from being a newbie to someone who can catch fish frequently.  I’m talking about EXPERIENCE – a rich memory of sensations and emotions all tied to a particular outcome.  In this case – hooking and landing a fish.

To paraphrase, the theory is that 10 years of work or 10,000 hours of work on a skill will result in expertise/mastery.  I believe this is a useful and humbling reference point.  I also believe one can cut that timeline back (the author of that rule believes this as well) if one can practice mindfulness.  Here’s what I mean.

As an example, I am going to reference the most common technique used to fish the Lower Niagara in the winter – fishing a 3-way rig off the bottom.  The picture below depicts a typical 3-way set up.  It’s simple to rig, easy to learn how to fish, and very versatile.  To ensure a life-like presentation, the angler needs to get the weight to the bottom and then lift, ever so slightly, as to not drag the weight on the rocks below.  What does, “ever so slightly mean?”  Answering that question is where verbal communication breaks down.  Enter my attempt to teach mindfulness.

My colleagues in this business and I have all kinds of ways to teach our clients how to catch fish from our boats.  From describing how to deploy the rig to how to know the difference between the weight bouncing off the bottom and a fish eating the bait, to setting the hook, to fighting the fish, all of us can arm a new angler with enough information to be deadly.  Still, none of us can feel what the angler is feeling.

Sure, all of us pay a lot of attention to what our clients are doing.  Body language while handling the equipment can tell us a lot.  How long it takes the angler to deploy their rig gives us some info too.  Once deployed, all of us watch the rod tips and lines of our clients, looking for an ideal alignment and vibration pattern.  This allows us to see where their bait is and what it’s doing.  However, we’re human, and although we try our best, it’s tough to observe multiple rods simultaneously.

Because we’re not omniscient and we also want to enjoy the day and bond with our clients, we must figure out a way to bring new anglers up to speed quickly.  We enable this by trying to teach our clients enough to make it work and we make corrections as we see them throughout the day.  However, that’s NOT ENOUGH to make our clients able to yield the best results from the hands that Mother Nature deals.  Believe it or not, there is an angle of employment for your line (in this case it’s vertical) as well as a vibration pattern that will yield the best results.  My colleagues and I know what these are, intuitively, because we’ve done it thousands of times.  Putting what that feels like into words, that’s pretty damn tough.

Yeah – I’ve been watching a lot of Star Wars movies lately due to the crappy weather.  Aside from the enjoyment I get from the stories, there’s some stuff in the conversations about the force that’s useful toward illustrating how mindfulness can improve one’s abilities.  Like in this clip:

I can feel the rolling eyes and scoffs already and I haven’t even published this yet.  I feel ya – but think about these facts for a second:

Those seconds, even fractions of a second, prior to hooking a fish are loaded with very important stimuli toward becoming a better angler.  I’ve been trying to get my clients to focus on these moments – asking them what they felt in this period.  What they thought they did right.  What they thought they did wrong.  What they need to do in the future to imitate these sensations.  I’m cautiously optimistic but I think this focus is working as I’ve observed improvements in performance on the water.

It’s not a coincidence that everything I’ve described to this point is also applicable to us guides.  All of us recognize there is something new to learn on the water from every outing.  We’ve watched others have a successful day while others struggled – same water, same baits, same gear, different results.  It’s not a coincidence that, more often than not, the most experienced guides catch the most fish/struggle the least.  Although that immense amount of time on the water made them good, only by encouraging mindfulness did they become great at what they do.

During the last chapter of my life, when I was an officer in the United States Marine Corps, I attended a master’s degree program.  Early in the course, the president of the school asked us to define something that’s stuck with me ever since – execution planning.  We were told to develop the definition on our own and to hold it close.  To me, it meant that although we can create a seemingly iron clad plan and train the hell out of our warriors, the chaos of combat will ultimately challenge everything we thought we knew.  By paying attention, being in the moment, remaining mindful, continuing to “plan” during “execution” (all ways of saying the same thing), we can mitigate the effects of chaos long enough to realize many small victories that lead to something bigger…