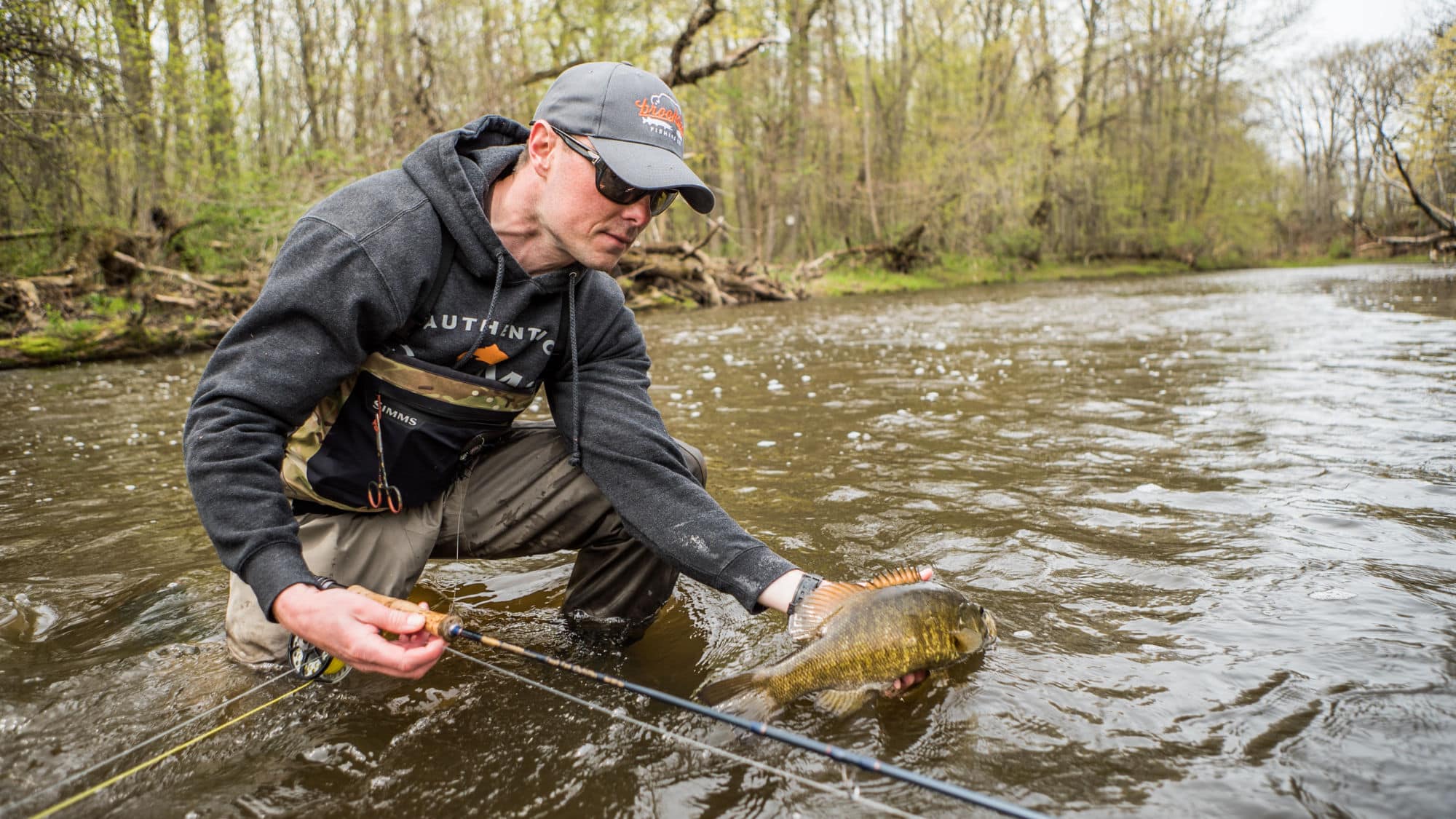 Since our last spring fishing update, the seasonal pattern has come into full swing. This past winter was super mild and we thought that would lead to an accelerated spring. That’s exactly what happened. A few unseasonably warm days raised the water temperatures a good bit. Steelhead seemed to vanish in the tributaries and numbers brought to the net in the lower Niagara River came down significantly (it was never consistently “hot”). Steelies are still around but not as numerous – more of an incidental than a consistent pattern.

What excited us most about the rapid warm-up was an early surge of smallmouth bass in the tribs, the Safe Boat Harbor, and the Lower Niagara River. We began catching these lake-run fish in good numbers about 3 weeks earlier than we did last year! Numbers and size seem to be up compared to last year as well. 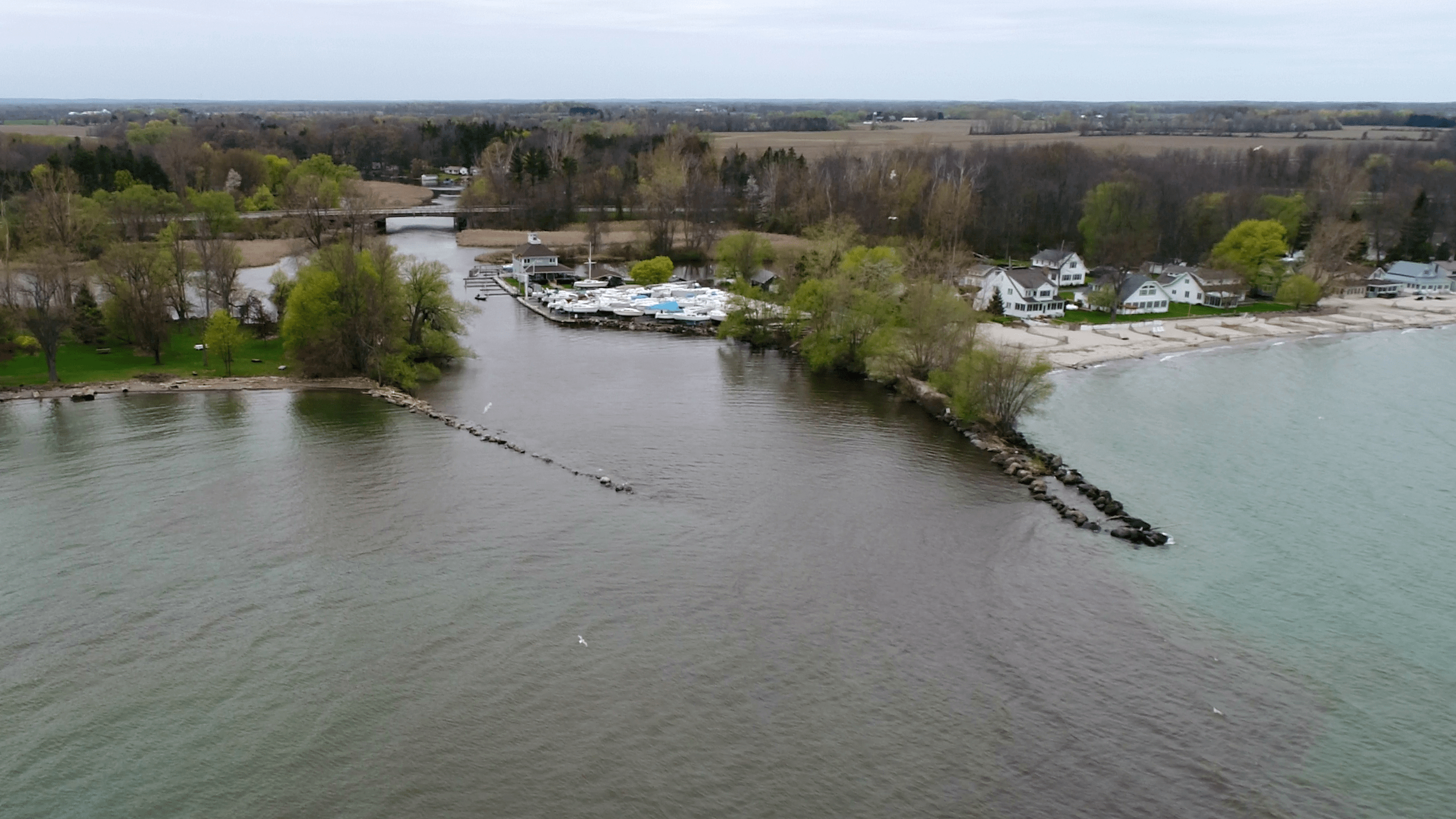 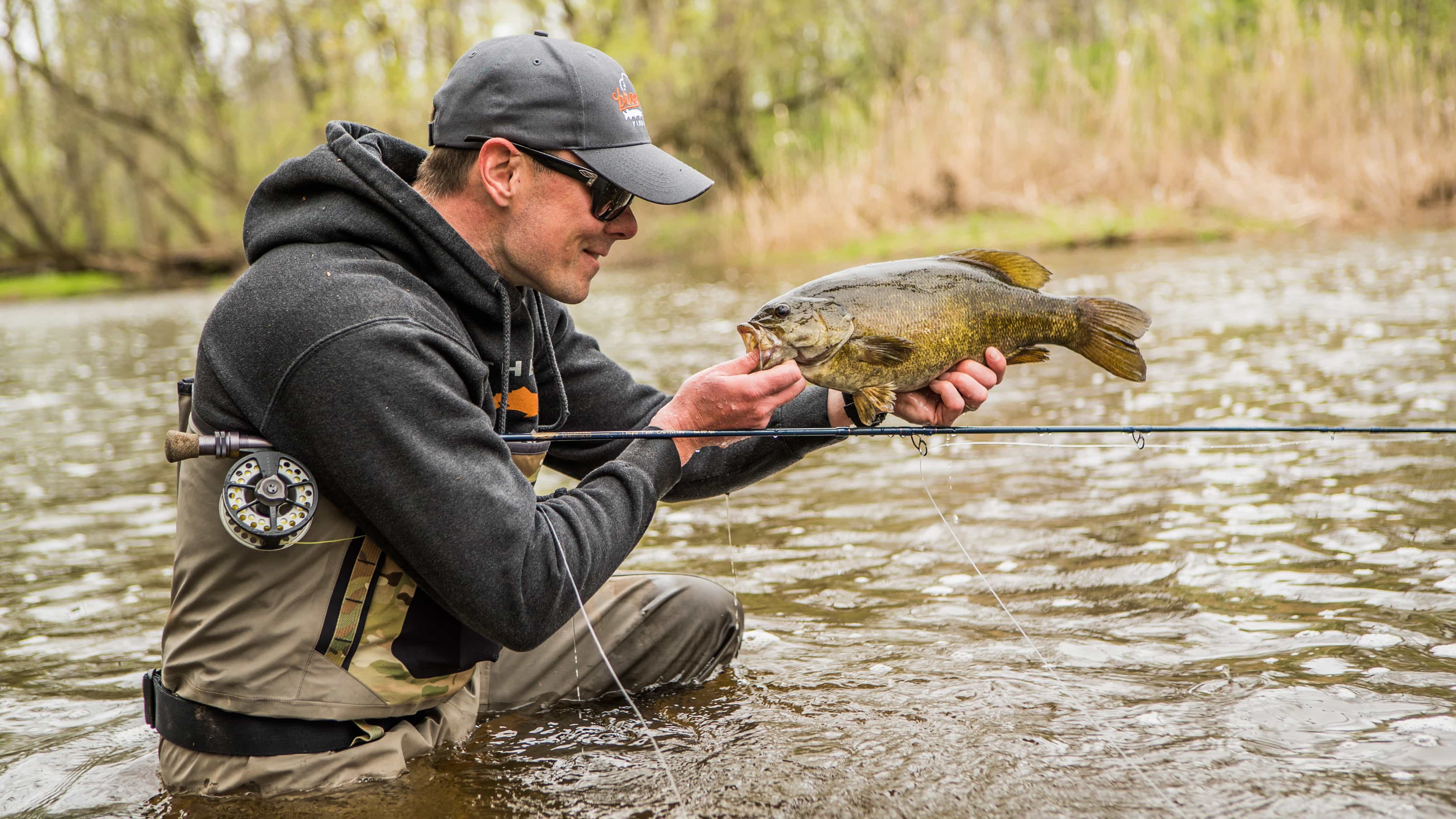 Spring Fishing Update:  Smalljaws on the Fly – Nothing Better For This Guy

This is our favorite little slice of a season all year. These fish move up the tribs to spawn in big numbers after fattening up all winter long. The run is similar to the runs anadromous fish make from the ocean into their spawning grounds and is unique to a few Great Lake tributaries. However, unlike the salmonids of the region that make this journey in the fall and spring, these fish are native and have been doing this for thousands of years. As a fanatic of all things native – this phenomenon is pretty damn special to us.

Look at those colors!

On the beginning portion of their run, these smallmouth bass are aggressive feeders that slam baitfish patterns with reckless abandon. Color doesn’t seem to matter. Over the past couple of weeks, we’ve experimented with everything in the box. Size doesn’t seem to matter too much either – we’ve fished #4 clousers to 5 inch articulated patterns. All are equally successful but I’d go big just to generate that huge strike! 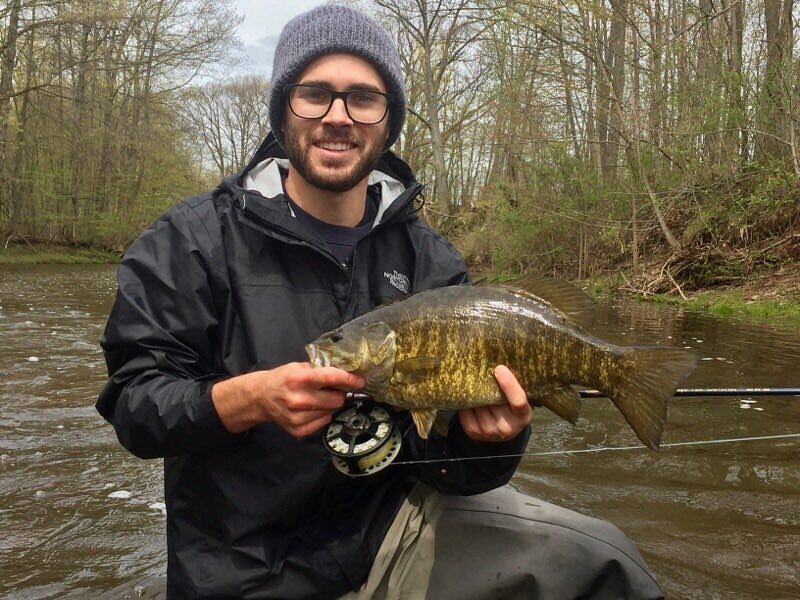 Colty boy with his first fish on the fly – glad he got one!

This run never seems to last long enough. Once the water temps get into the 60s and stay there consistently, smallmouth bass move from holding water to slack water where they can build their beds and spawn. A little depth, gravel/rocks, and minimal current, make for good spawning grounds. Once they get on their beds, we leave them alone. They get a little sluggish and to be frank, become easy targets. 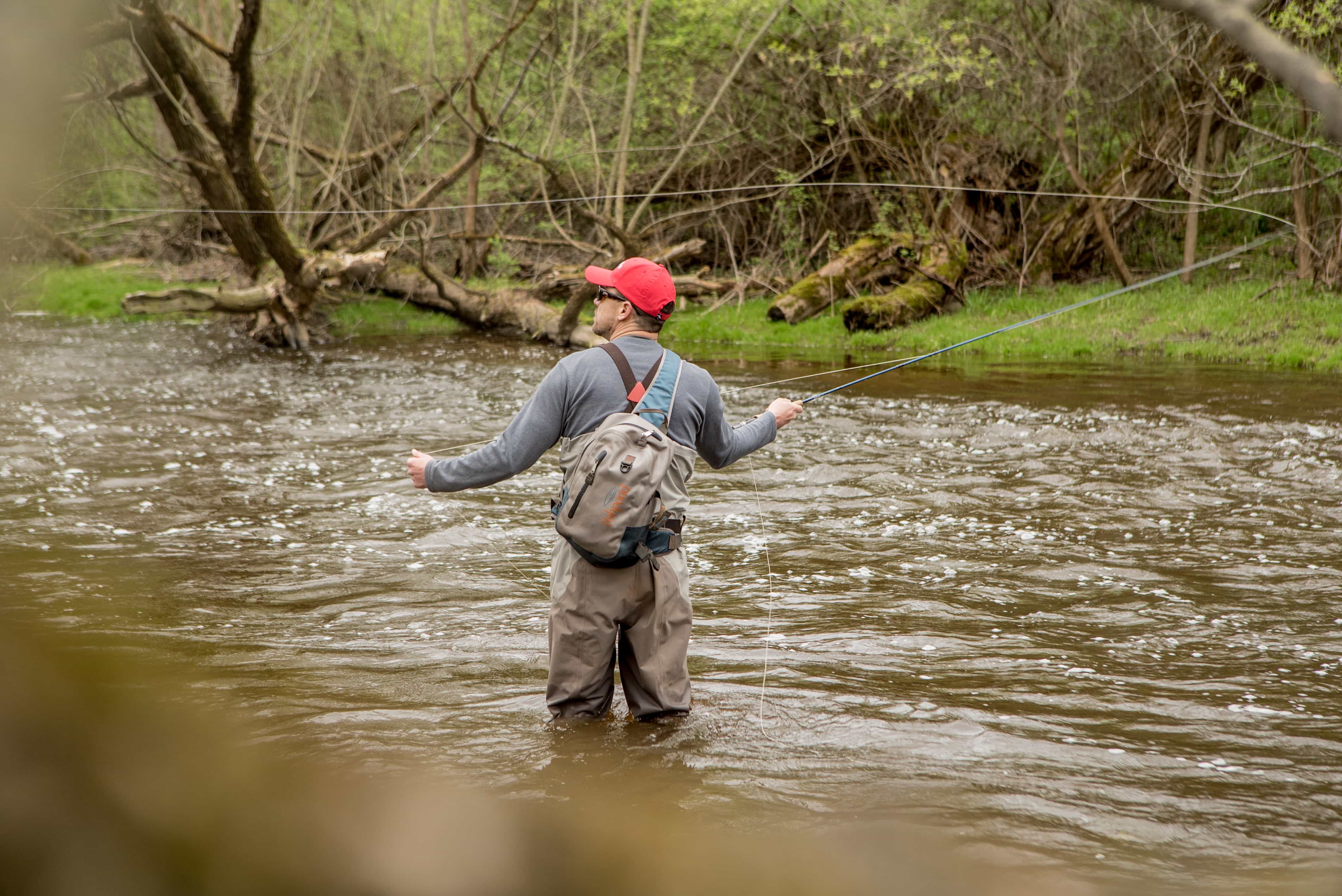 Nate with the tight loops in tight quarters 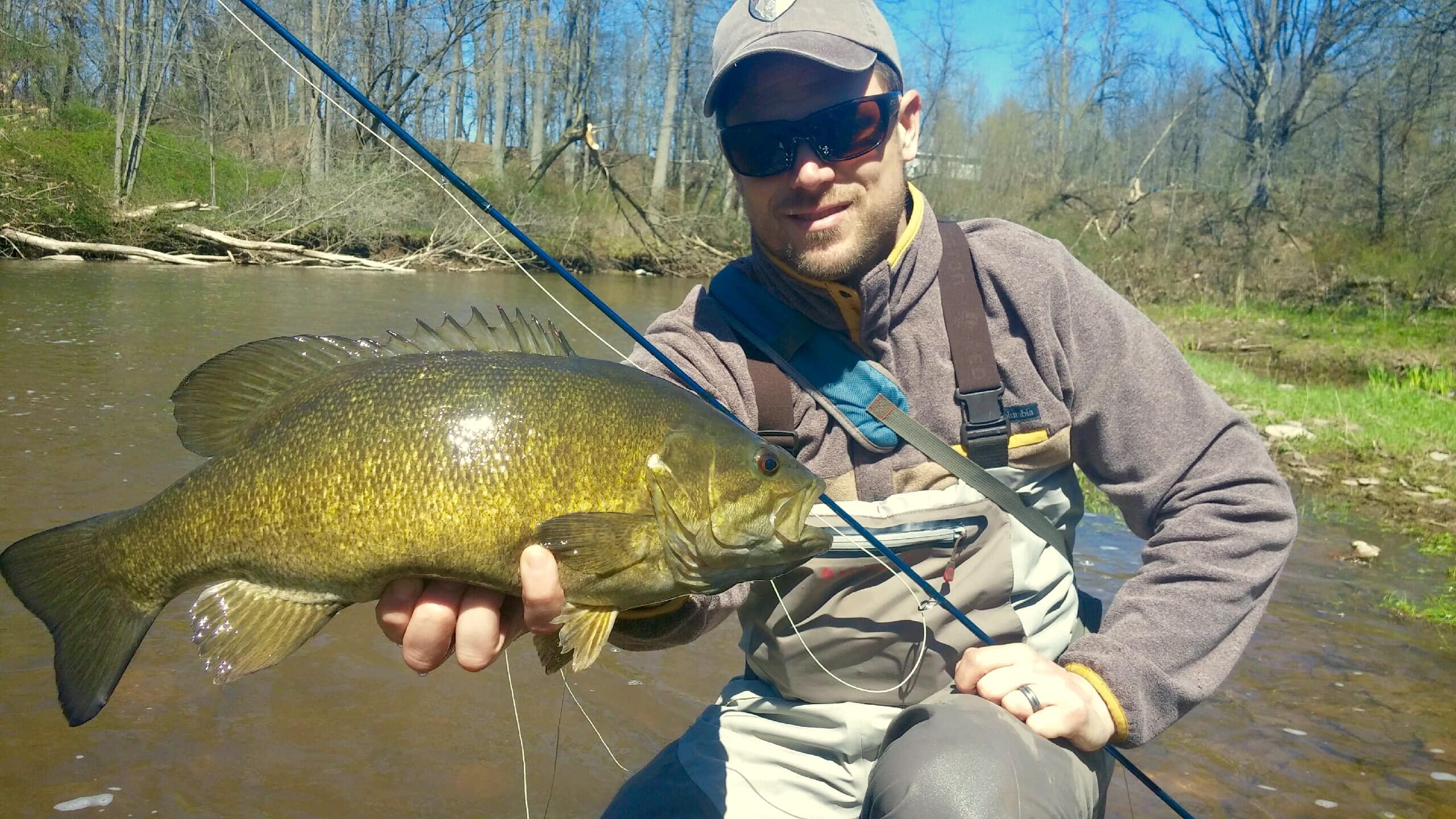 Nate with a Lake run tron

Lay Off The Bedding Fish – Move on to Trout, Carp, or the Big Water

Unfortunately, most anglers don’t see smallmouth bass on beds and think of it as a time to leave them alone. The opposite is usually the case. In a few weeks, take a walk down some of the Lake Erie tributaries and you’ll see many fish with scar tissue and loose, white flesh hanging off their jaws. They will look that way because while they protect their beds from predators, many anglers will stand over them and pound them with flies and lures to trigger a strike. Once caught and released, these fish will return to their beds and become a target for the next angler.  Sadly, that cycle will repeat more than a few times.

This recent bout of cold weather and rain holds some promise. Water temperatures, especially in the larger tribs, aren’t quite where they need to be to trigger a full on spawn. There are a few beds here and there, but not many. Hopefully this week’s forecast will hold, dumping a lot of rain and cold water into the tribs, keeping these fish in pre-spawn mode. Yeah – I just wished for cold weather and rain. We’ll be out there monitoring this activity. 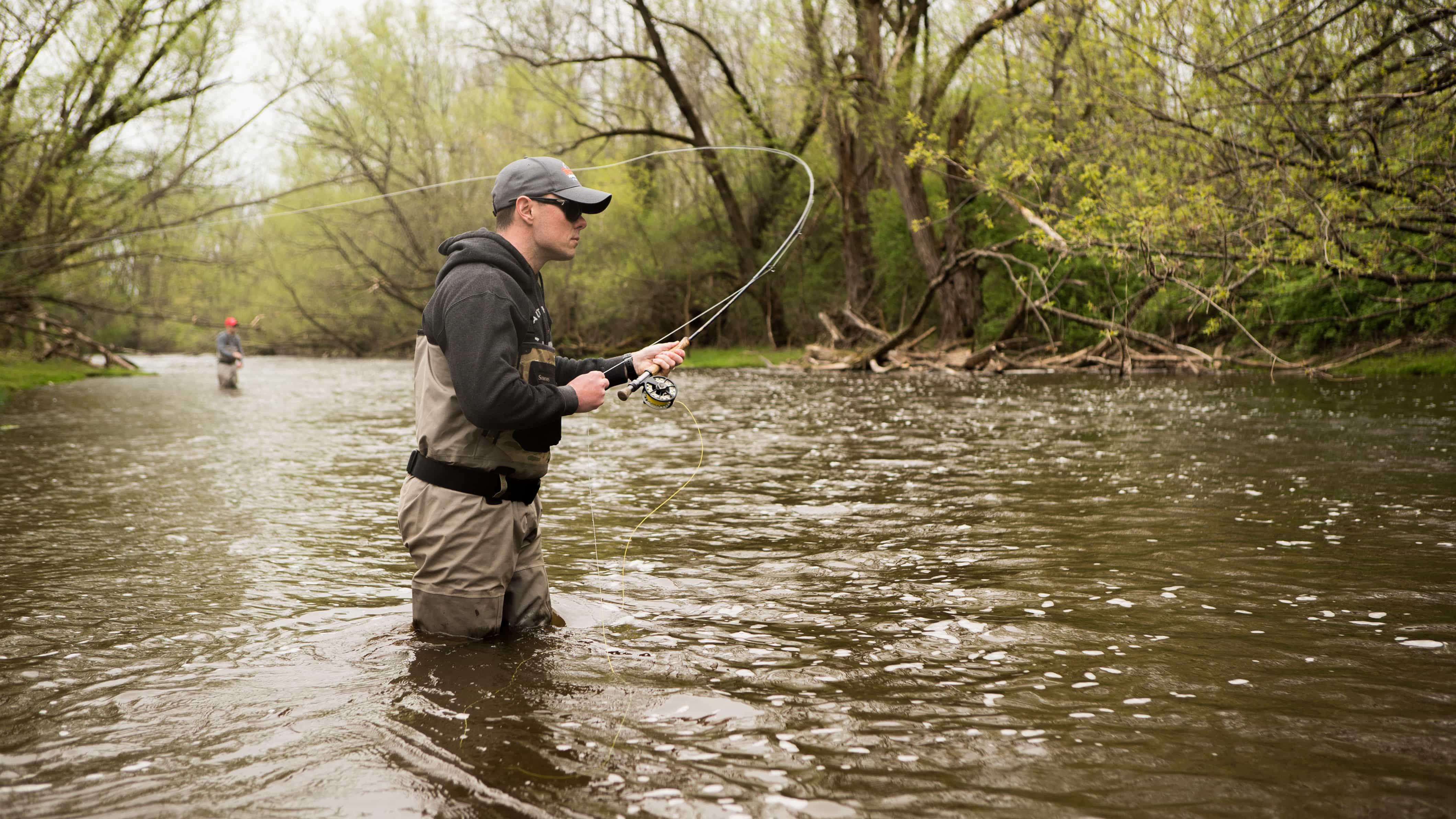 It’s Time for Rising Trout Too

Another benefit of all this rain in the forecast is that the inland trout water levels and temperatures should remain in good shape for quite a while. Hopefully that’ll come to pass because the early warming pattern and drought we experienced last spring/summer put us off the trout water earlier than normal. We’re looking forward to catching trout on dries – it’s been quite some time. Sure, stripping streamers all winter produced some big fish, but nothing tops that surface eat on a dry.

It won’t be long before we start seeing robust insect hatch activity and rising trout. It’s happening sporadically now but once in full swing, our region gets some great hatches that would put any dry fly fanatic into a frenzy. From hendricksons, to sulphers, to caddis, to eastern green drakes and more, that last hour of daylight in the late spring showcases all the elements of a healthy ecosystem. Seeing mother nature in all her splendor can’t come too soon.

The next Few Weeks

The wx this week is going to wreak havoc on just about everything.  BIG wind and rain will turn everything into chocolate milk.  However, we’ll still get out to recon a few things.  We intend to maximize the trib smalljaw run to the last minute.  We’ll also be checking out the inland creeks for hatch activity.  Finally, the big water is calling our name.  Eastern Lake Erie and the Upper Niagara River are in need of some love.  Smallies will be staging for the spawn as will carp soon thereafter.  While we are on the water, we’ll be on the lookout for muskies in shallow water in anticipation for the opener on 17-June.  Book a trip with us now to secure your own slice of the action.

On the weekend of 20-22 April, we travelled to Ypslanti, MI and linked up with Mike Schultz and his team at Schultz Outfitters. This was our first travel/destination episode of Re-Discover Your Region and it was a resounding success. We had a blast fishing with Mike and Justin Pribanic – they put us on some beautiful specimens and equally beautiful water.

As you are aware, we are HUGE smalljaw fanatics and Mike’s region of Southeast Michigan is a truly unique native smalljaw haven. I’m not going to say too much more here. The episode will be live in the next week or so. Make sure to subscribe to our YouTube channel to receive notifications of the publishing date.

We’re also in the process of filming our Buffalo Niagara Spring Episode. This will be our best local video today and will round out a year of filming. Fly anglers in the know – picture all things fishy in the Buffalo Niagara region during spring. It’ll all be in there. Don’t worry, we won’t be blowing up any spots.

Finally, we will travel to Savage River State Park in Maryland next weekend to visit our close friend and guide Tony Lohr of 85 Day Angling Company. Small water brook trout, freestone browns, a strikingly beautiful forest, and an “uber sexual guide.” What more can you ask for in a video for the mountain, off-the-grid, and trout fishing fanatic. Stay tuned. 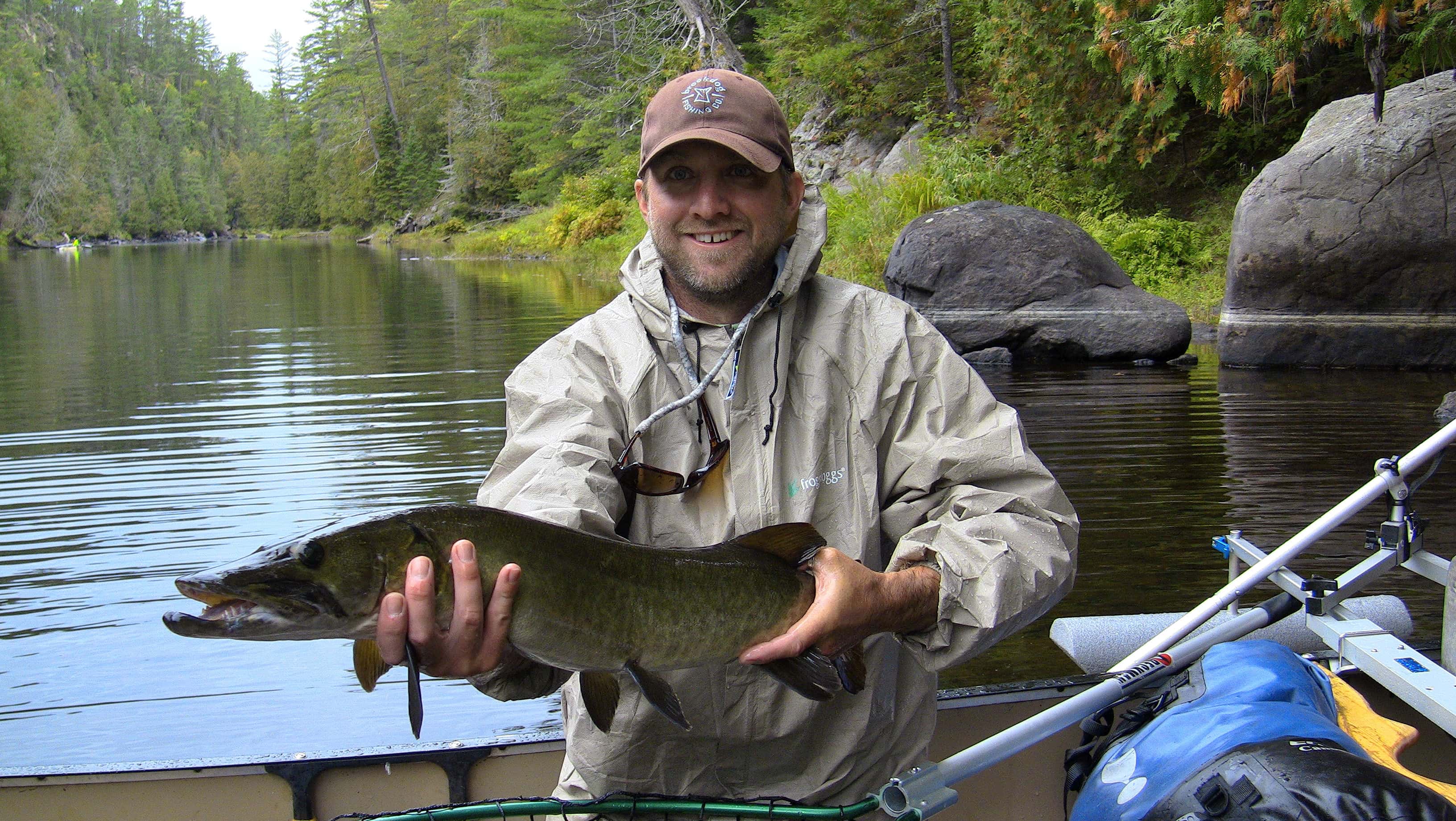 Tight lines and best fishes.  Give us a call if you want to get out on the water!