The 2019 Guyana Trip was a success! My colleagues couldn’t make it happen this year so I traveled alone. That allowed me to do a couple different things around the country before heading into the jungle to fish, which gave me a greater appreciation for the beauty of Guyana. Going without the companionship of my bros from back home also put me in the position of having to pair up with another angler, Jay Samm from the UK, who was also traveling solo for this journey. It worked out wonderfully and solidified the idea that angling adventures can enhance existing bonds between friends/colleagues and help to create new ones. 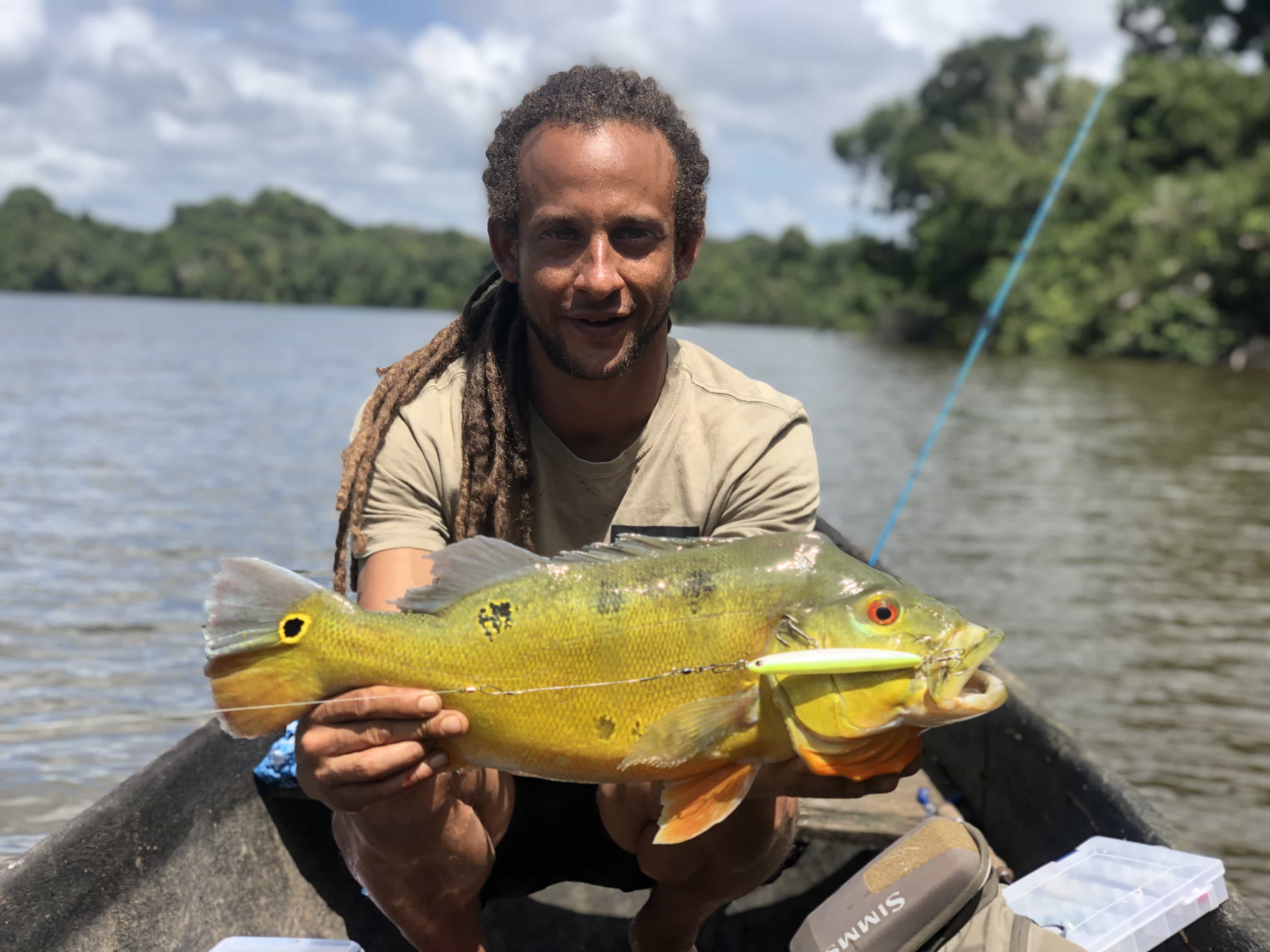 Jay with a nice payara

Getting into the Jungle for Guyana Trip 2019

I arrived a few days early compared to last year in order to take the trail up. What’s the trail? Long story short – to get to the jungle/where we fish, you have 2 ways to get in reach of the river. Flying or driving. Both will get you to where you can get on the water – then, it’s a boat ride to get you to camp.

Last year, Nate and I took the air route. Chuck and Mike were forced to go via ground due to flight delays getting into Guyana from JFK. Their account of the ground route – although somewhat horrific sounding – was a great story. In a weird way, I was somewhat envious of their experience and wanted to see if I could get a little slice of the same drama this go around. 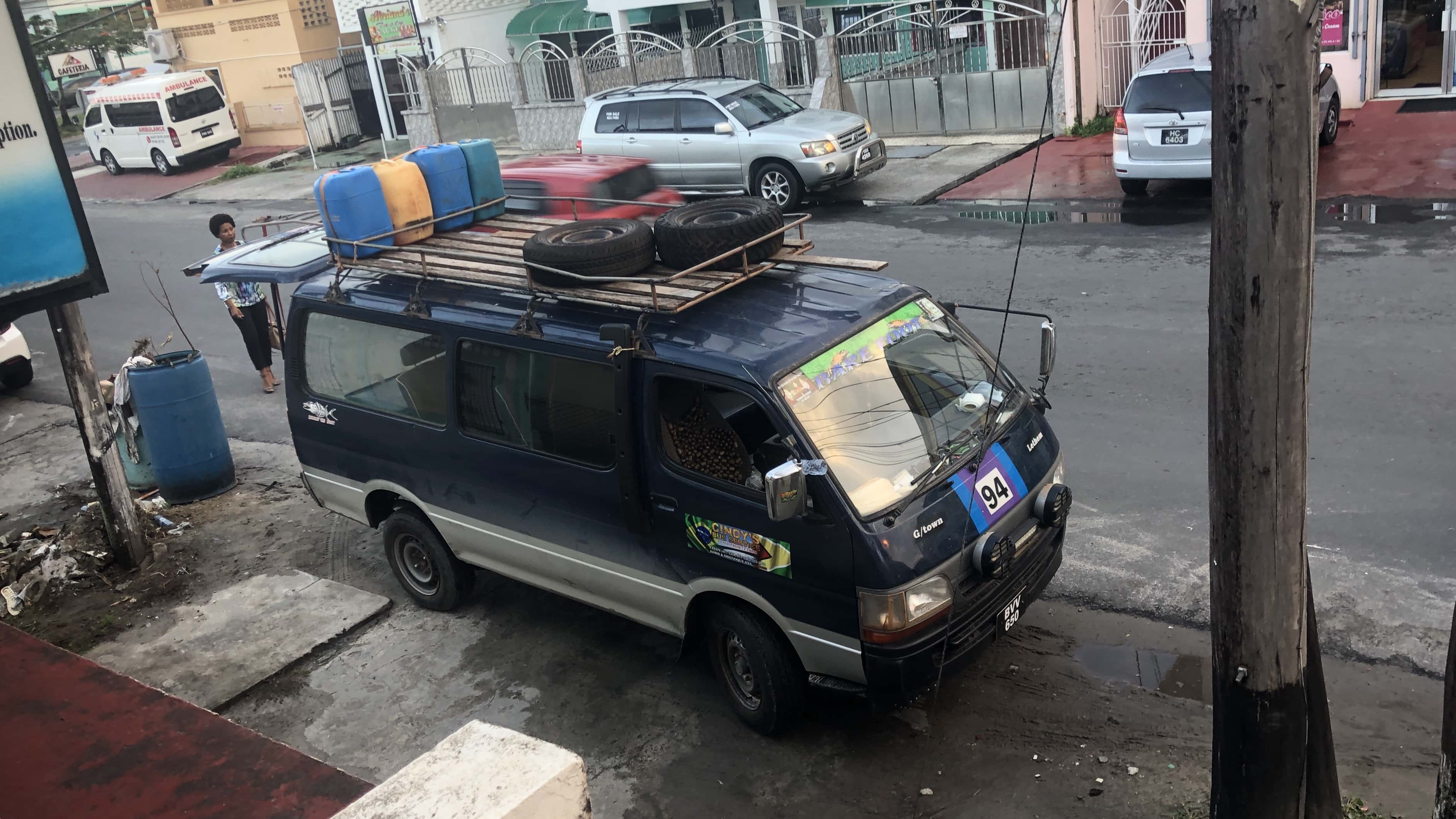 The barefoot bus – ready for the trail

The Trail – A Different Route for Guyana Trip 2019

The trail didn’t disappoint. We departed around 5:00PM and made the 11hour push – I’d provide pics but it was dark and I faded in and out of consciousness. All I can say is it’s kind of like what I imagine early trade routes looked like in the US.

There were small hamlets along the way offering everything a weary traveler could want. Well, if you’re easy to please in a primal, borderline lawless kind of way. The “road” was fraught with huge holes filled with water of unknown depths. The “bridges” seemingly held on by strands or a couple planks. As insane as using this trail as a major north/south line of communication sounds, the locals make it work. Throughout the drive we helped others in jams and saw many more receiving aid. It’s a community that uses it and there’s kind of a unity among its travelers. Bottom line – it was awesome. So cool I’m contemplating making that a part of my schedule on future trips. 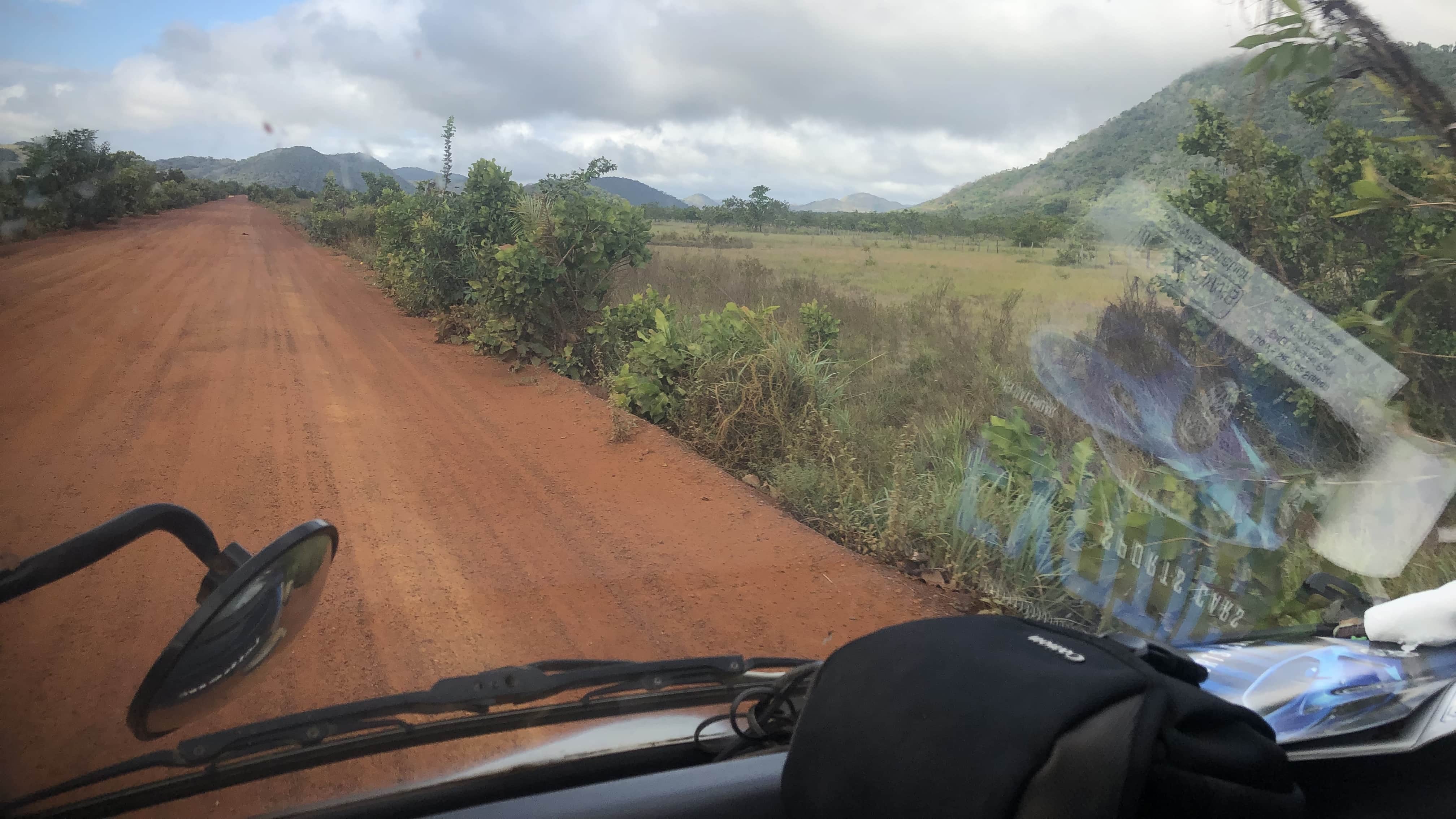 After a long night on the tail – we made out of the jungle and into the savanna.

After the sun came up on the trail and we finally made it to our staging area (Letham, Guyana) it was time to pull ourselves together and prepare for jungle life. Because I was a couple days early before the rest of the group arrived, I took the time to acclimate, rest, and see some of the mountains between running errands. My host and the outfitter of our excursion, Jules Fredricks, showed me around his family cattle ranches in the Savanna region of Guyana.

On par with the rest of the remote regions of Guyana, the “roads” are really trails so getting to these ranches was part of the journey. Careful navigation throughout these road networks came with a slow pace and a ton of time to take in the scenery. I had no idea there was this kind of beauty in Guyana.

Golden stretches of grassland surrounded by mountains and trees were in constant view. Native tribesmen dressed in traditional cowboy garb lassoed cattle and pulled them to the ground for branding. Subsistence farming was everywhere. People were always smiling and waving. The beauty and simplicity of it all was refreshing…soothing. I’m so happy Jules took me on that little voyage – it gave me a whole new picture of the country. 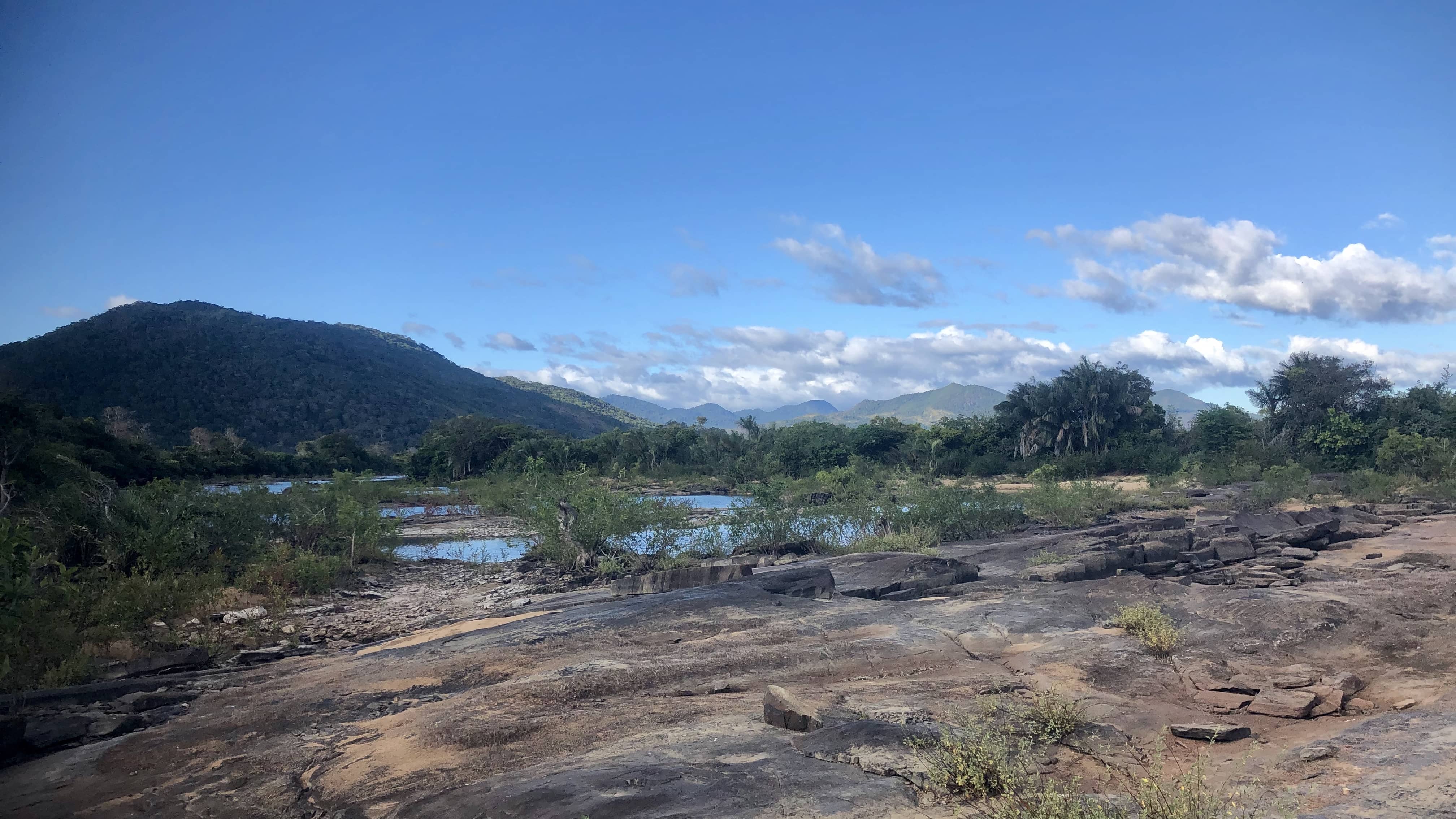 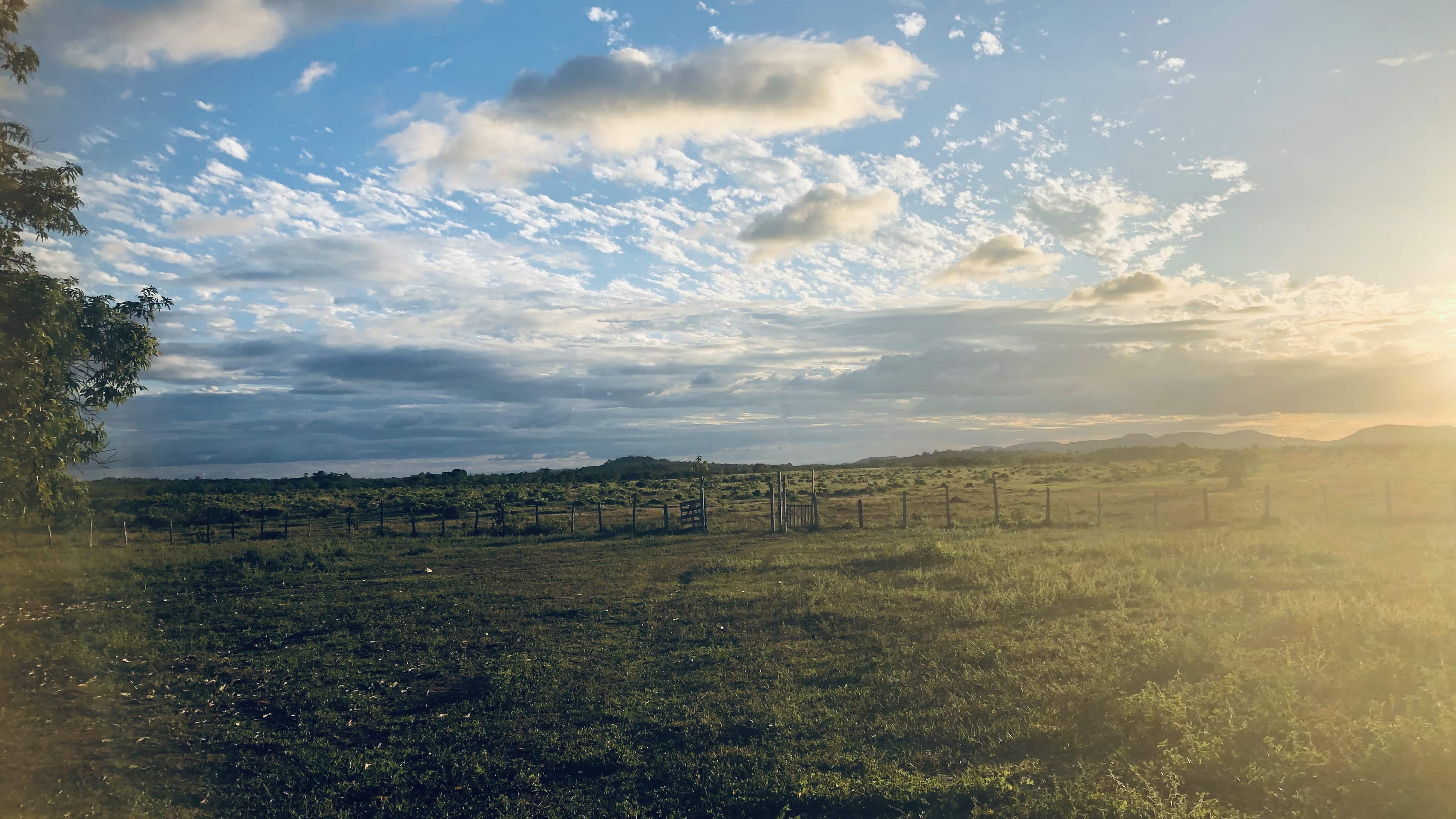 The view from one of Jules’s family’s ranches

I’m not going to write much about the fishing. I did that last year – click here for details. Just like last year – we caught many fish and I finally landed an arowana – a fish only one of us (Mike) caught last time. We also landed a ton of catfish. What was different about this year is that I went exclusively native with my diet.

Back home in the U.S., most of us take much time to consider where your food is coming from. Often times, we go to the grocery store, restaurant, or fast food joint, grab food, cook it, eat it, and dispose of the scraps. That’s obviously not how things work in the jungle. 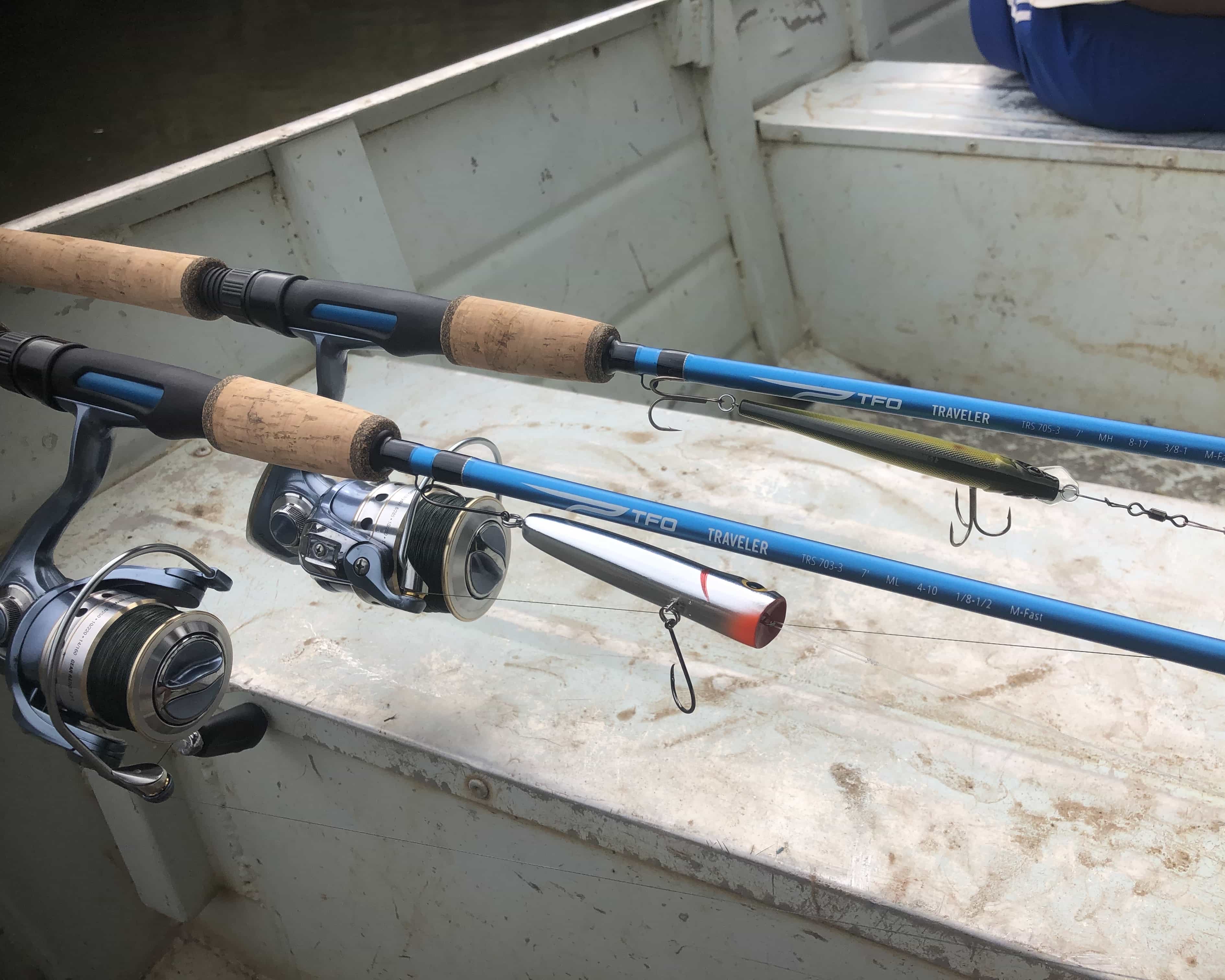 Part of the arsenal ready for work – TFO Travelers were awesome One of our competitors

Going Native with the Diet

Going native means you have to harvest your food daily, prepare it for cooking, and cook it up. It’s a constant pressure that’s always there. Only you can fulfill your body’s need for sustenance and the only way to do so is either by hunting or fishing. Both these activities take time and skill – an efficiency that’s essential for survival.

The act of hunting and fishing costs calories so the payout has to be big or you’ll just end up hungrier than when you started. Your senses need to be dialed in to what’s going on around you in a kind of primordial way. It’s awesome because if you put yourself in this situation, getting primordial sort of just happens. If your mind has any clutter going into a trip like this, going native on your diet will clear it all out. Having fun while trying to fill your belly dominates your consciousness.

Becoming a hunter gatherer for a couple weeks is also interesting because it gets you in touch with your body. When you shed all the “drug like” dependencies us westerners have for processed foods – it can feel like withdrawal. Once you get passed that, everything you eat or consider trying to capture to eat comes with a calculus – how much energy will this yield and for how long? How much is enough? When am I really hungry or just bored? When should I pursue my quarry? How? Payara getting ready for the grill 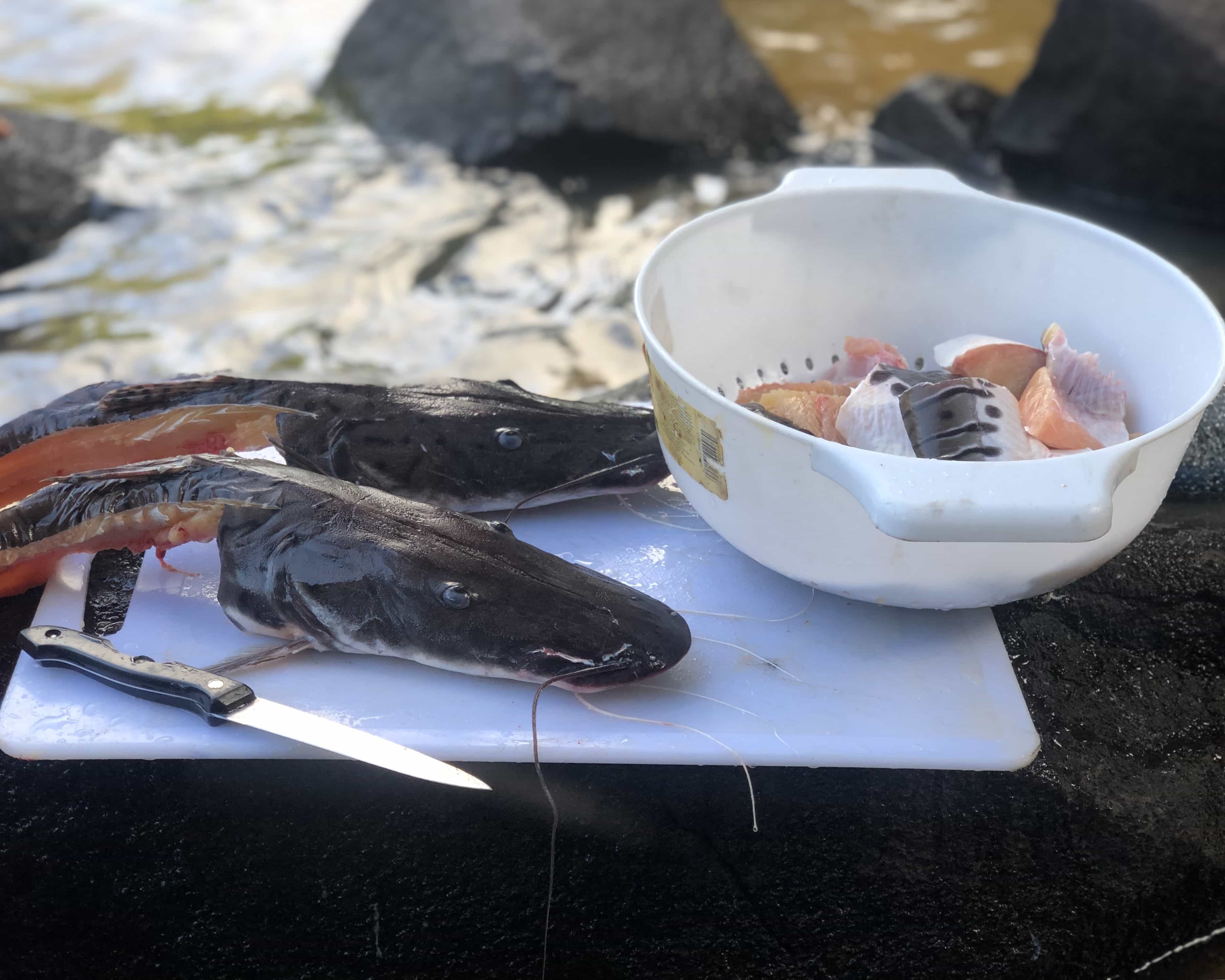 Awesome on the cast iron skillet with a little oil – the tiger catfish. An awesome fighter who’s meat kept us fighting for another day

The Outcome of the 2019 Guyana Trip

I went into this trip very lean but still ended up shedding 5 lbs – probably from my gut (intestines) and some water. My new angling bro, Jay, and I both stayed relatively well fed. We put in time and were able to make it all work. Plus – Jules is an incredible camp cook who taught us some delicious game recipes we were delighted to stuff in our faces.

Another benefit of spending all this time hunting and gathering was how much I learned about my angling abilities. I fished on the fly and with conventional tackle. Casting for over 10 days really dials in ones skills. I learned to appreciate the subtle differences in medium heavy and medium light spinning rods. I learned my ideal leader sizes and strengths for certain flies. I improved my flipping game a bit. I got pretty damn good at walking the dog. 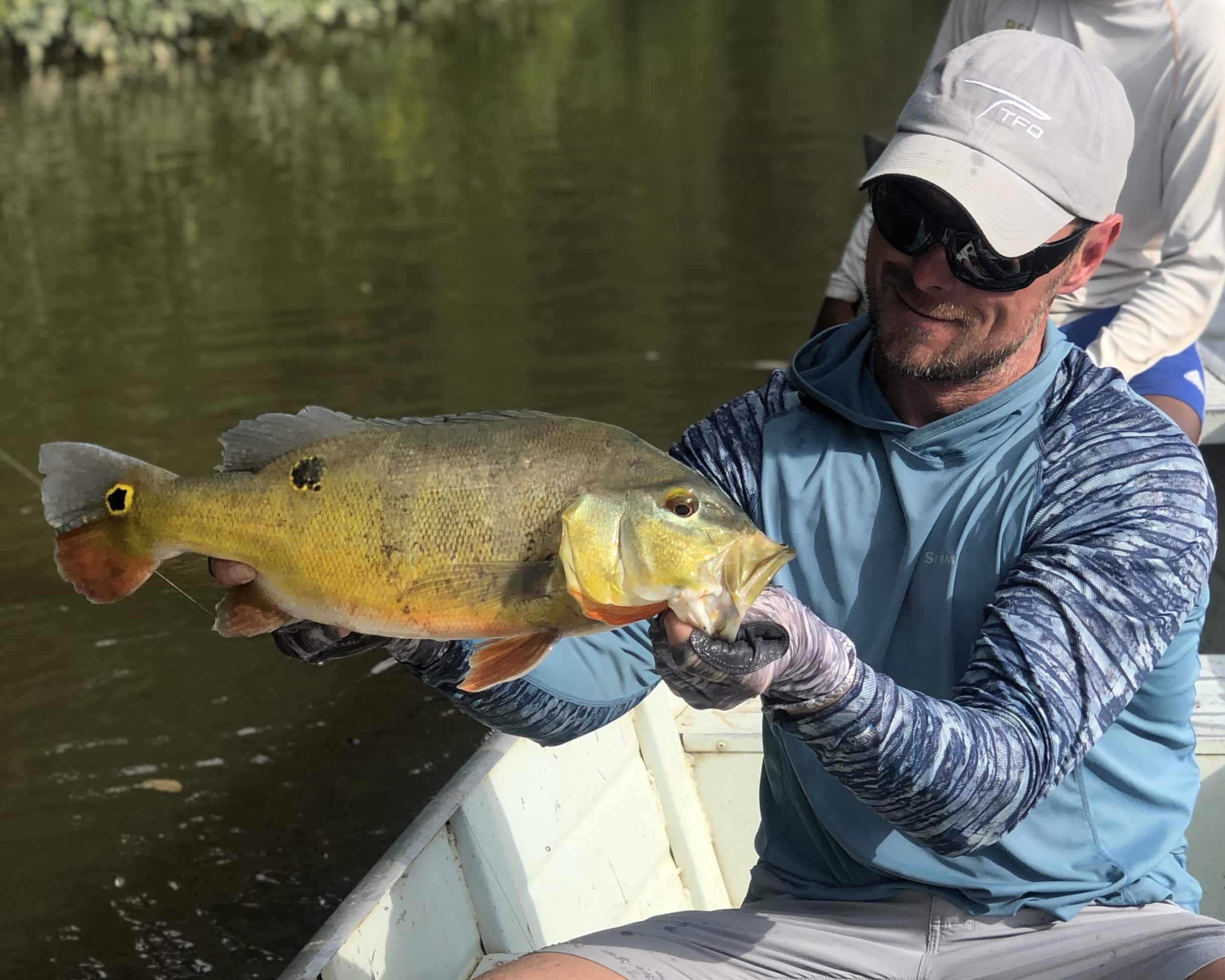 Ah, my little bro Demus – couldn’t have landed this arapaima without him

The leopard cat – kind of a poor fighter but absolutely delicious when fried with some Guyanese spices. A decent bicuda that smashed a top water fly 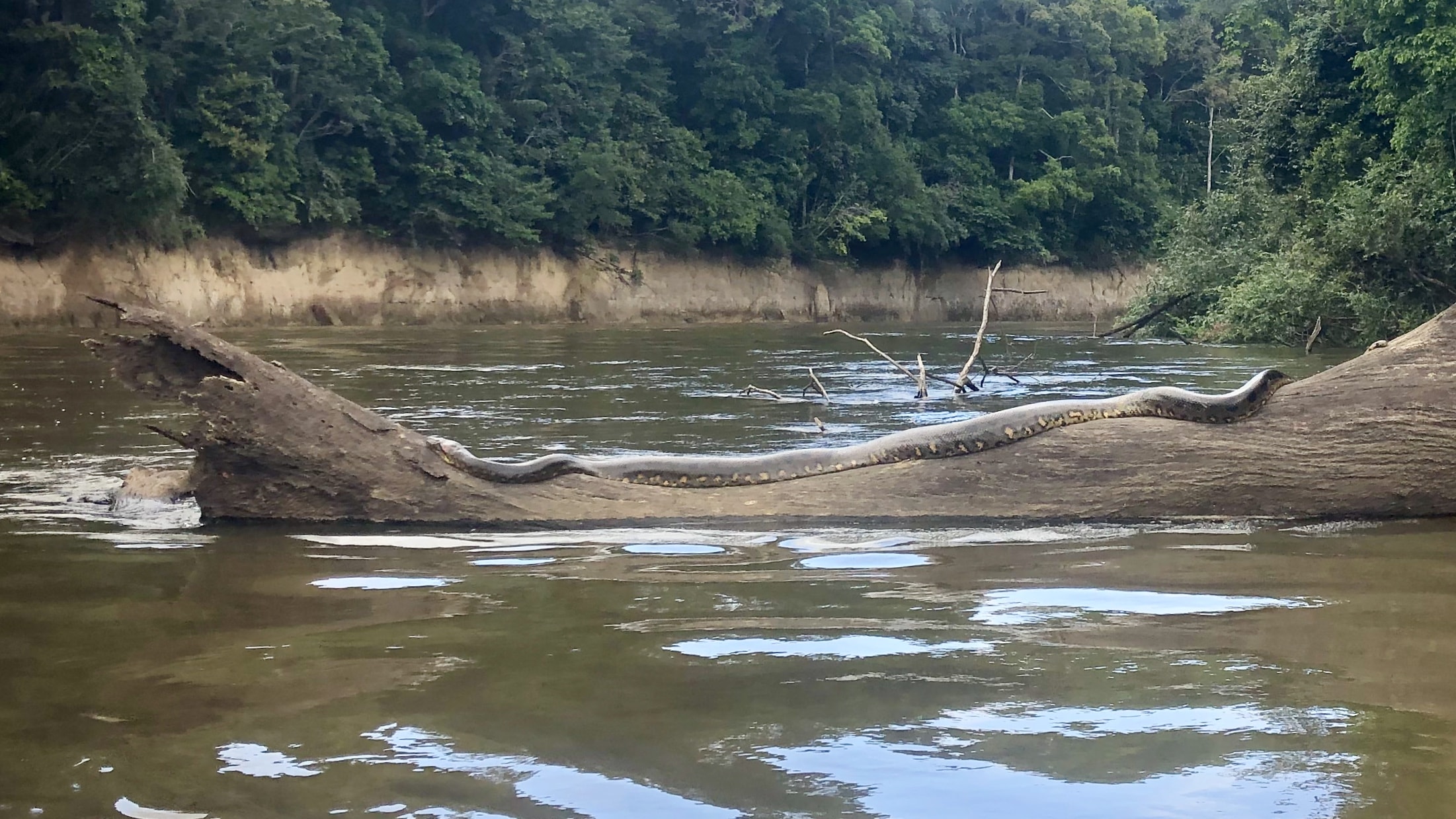 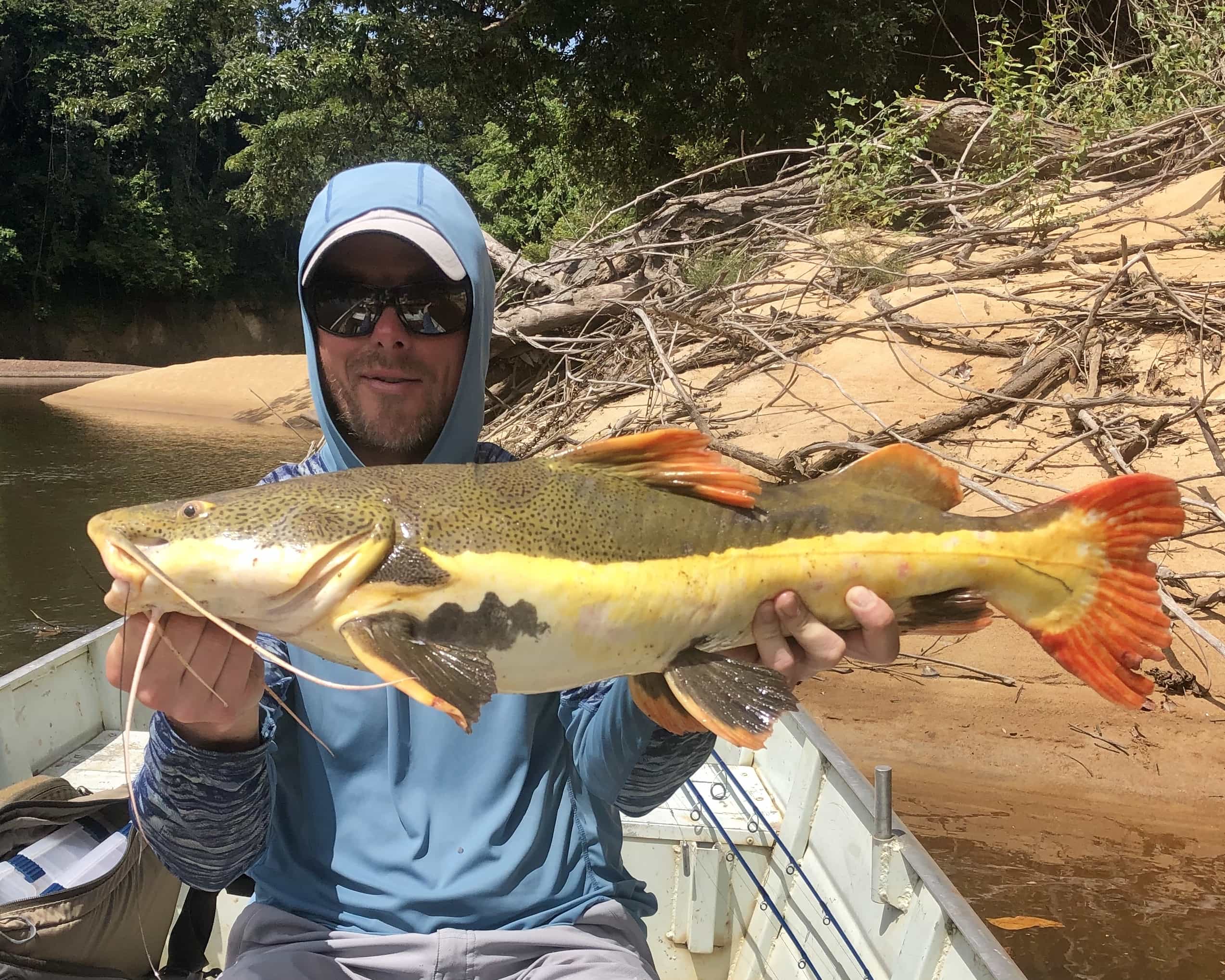 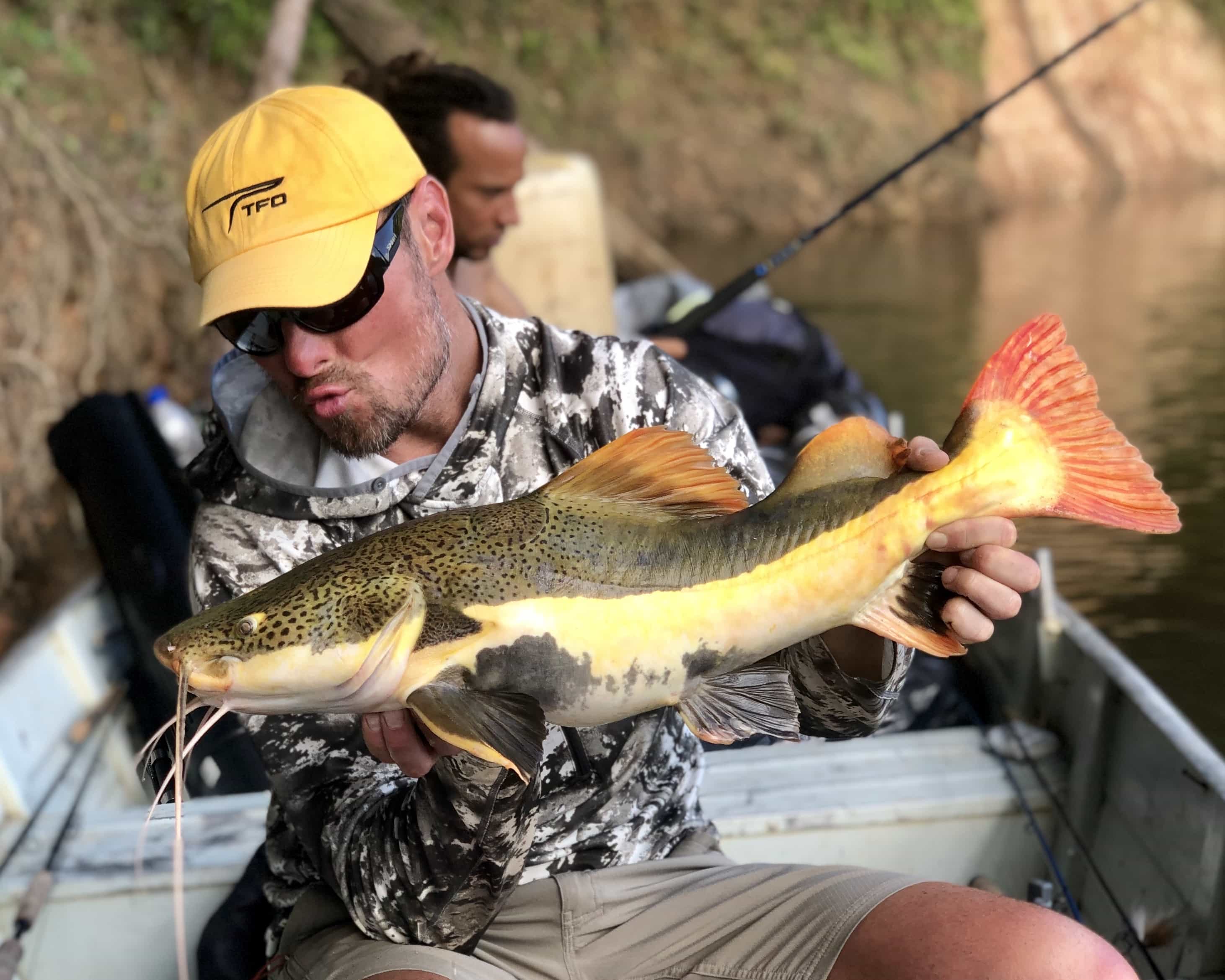 My first arowana – and a beauty at that 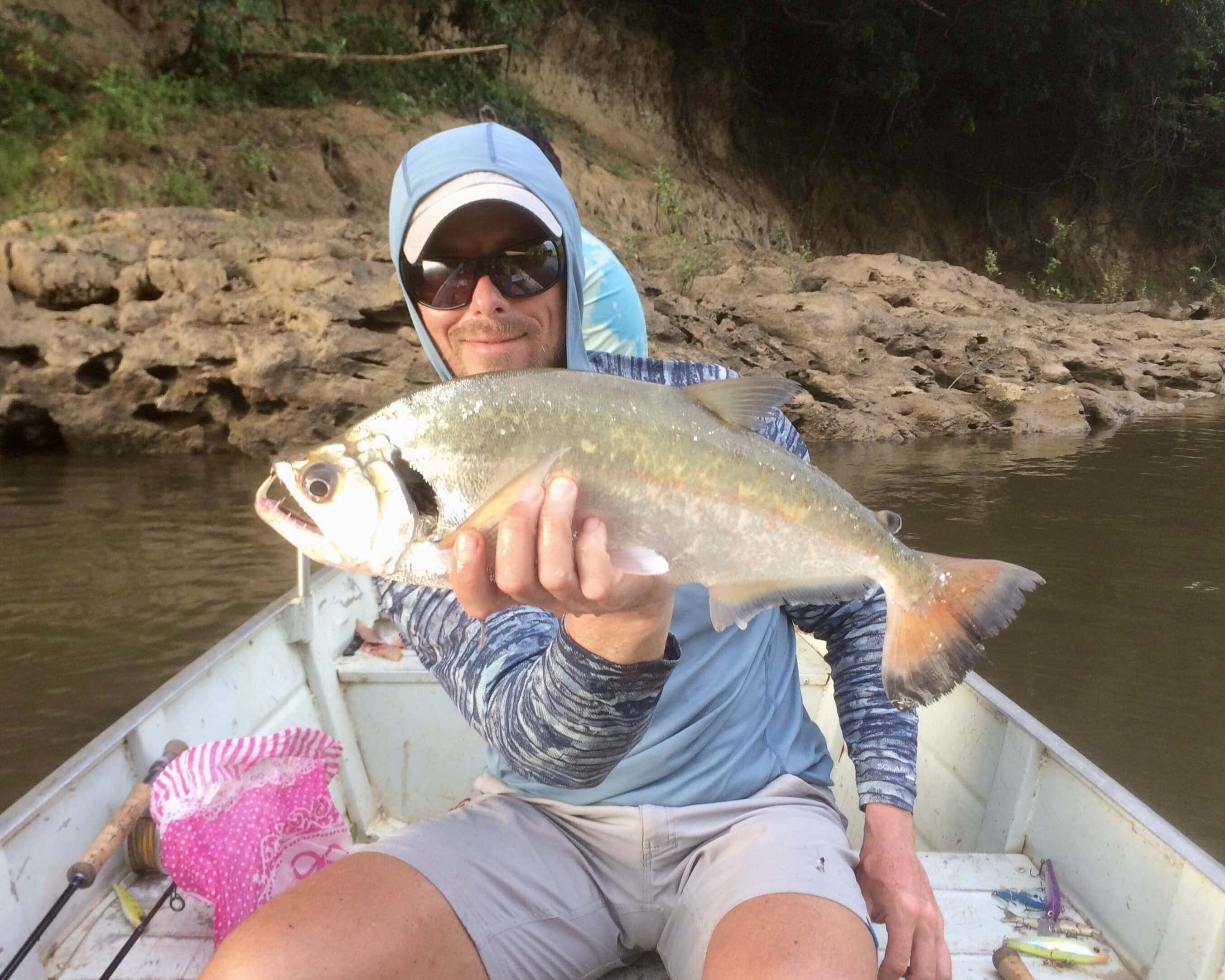 It was a good trip that left me wanting more. I took a ton of notes about what I want to accomplish there in 2020. I’m in the process of putting together a team of pipe hitters for that one – you know who you are!  Thank you to Larry Jones and Jules Fredericks for putting this together and much love to our native friends and guides – Terry, Demus, and Stephano.  See you next year!